When our extremely friendly a server came over, she explained how as a table of five, there were a number of ways we could have our dinner service run. We could specifically pick every single one of the small plates we’d like for the meal. We could opt into the large format lamb dish with a few small plates to round it out. Or since we were five and would end up ordering around 15 dishes for the table anyway – we could just let nearly the entire menu come at us until we say stop. And that’s exactly what we decided on… because, well, we didn’t have to make any specific decisions that way and it just seemed way easier and way more fun. 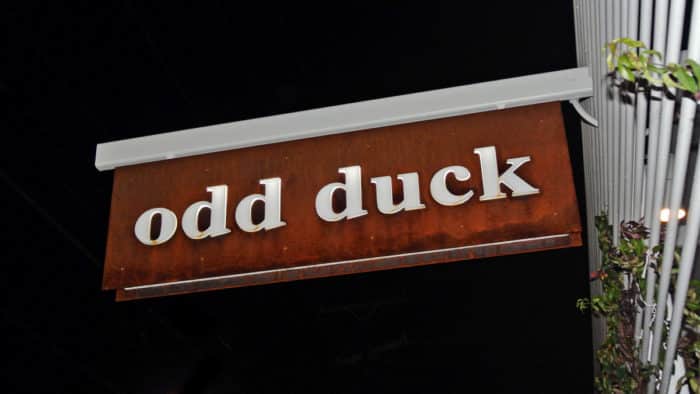 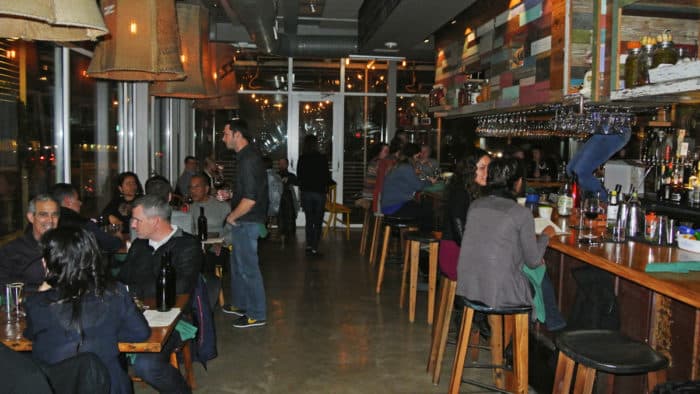 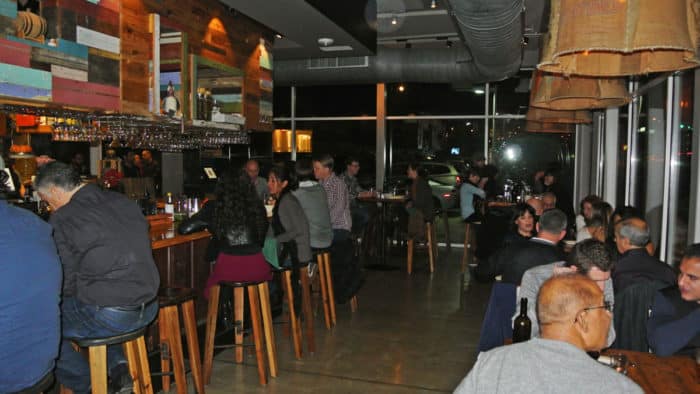 It was sort of like fondue, but with a strong mustardy back bite. The texture of the pretzel was outstanding and it paired extremely well with the thick creamy dipping sauce. And no, I didn’t hesitate to spoon that mustard béchamel directly into my mouth after we had crushed all of the pretzels. 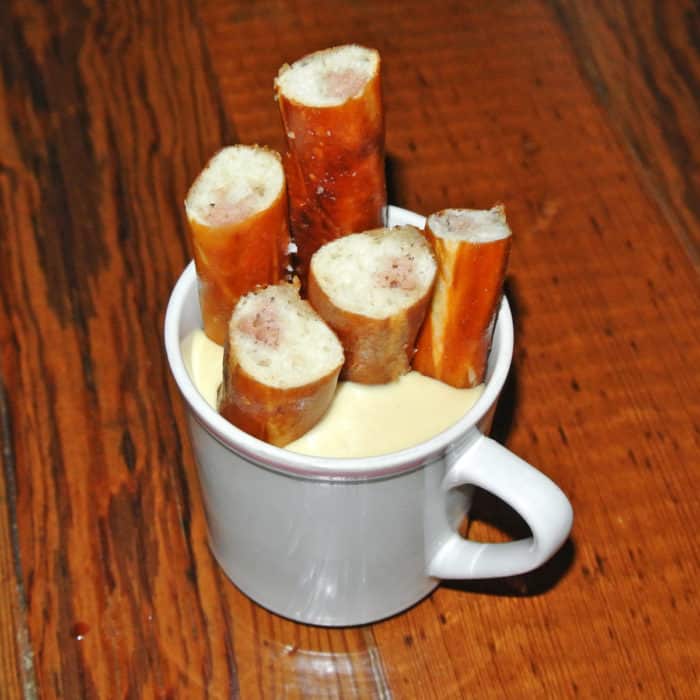 Next up was one of the more petite small plates presented to us. This dish called Beer Battered Sweet Potato consisted obviously of cubes of sweet potato that had been beer-battered then fried. Those little nuggets were very tasty and surprisingly spicy due to the peanut, cilantro, and kickin’ chile toppings but, this wasn’t the most exciting thing we ate that night. It was pleasant, but wouldn’t be an essential order for next time. 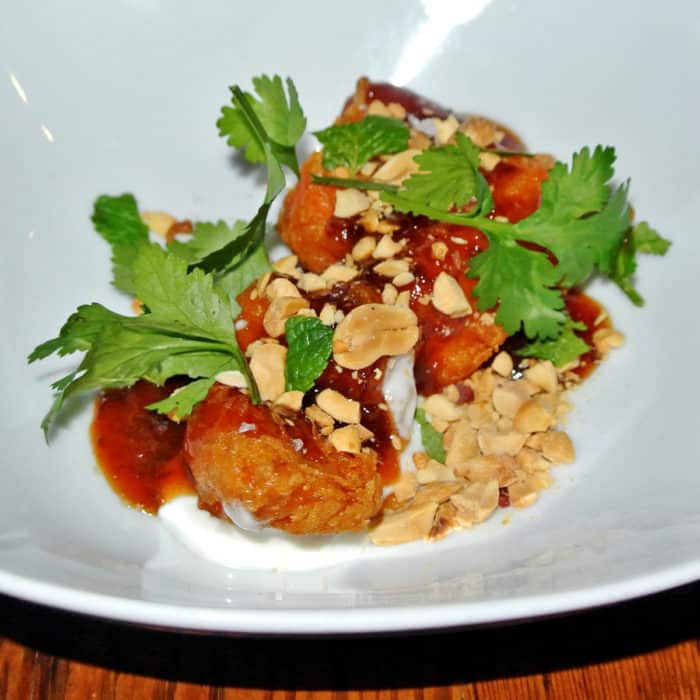 The Lamb Sausage dish on the other hand may have been my favorite dish of the night. The ground lamb was formed into a sort of lamb kofta kebab log which was grilled and spiced to absolute perfection.

It was served with Meyer lemon relish, green chile hummus, raisins, and crushed almonds which gave the dish a rather Middle Eastern bent that I found both unexpected and outstandingly exciting. Plus, it’s a well-known fact that Texans really know how to grill meat and this lamb sausage was a shining example of that long-standing tradition and skill. 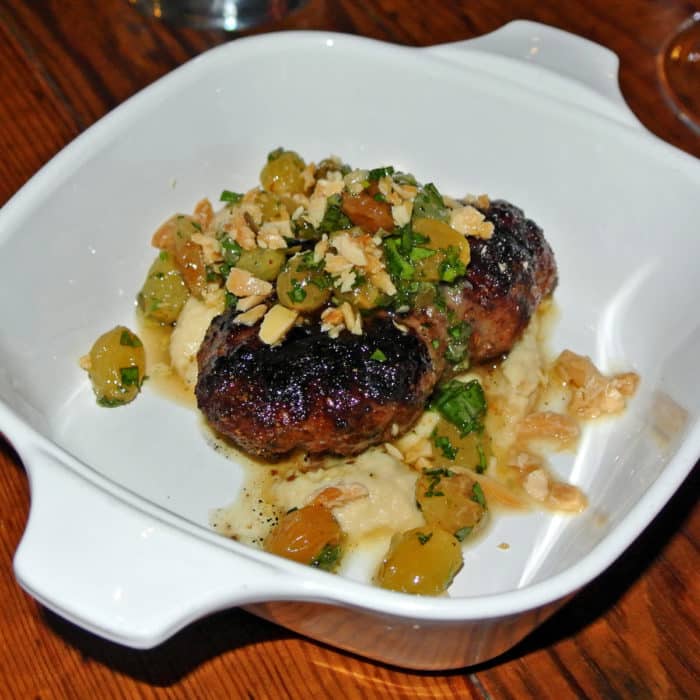 From there, we moved onto the Roasted Beets. The dish included the descriptors: borscht, dill, creme fraiche, and chips so we were all sort of surprised when the dish didn’t end up resembling a borscht-like soup. Instead, it more reflected the flavors of a traditional borscht. The beets were roasted quite well and the crispy chips added a nice textural contrast, but unless you’re really obsessed with beets, I wouldn’t recommend ordering this one.

Then came the Everything Sourdough Bread served with house cultured butter. I’m not a huge bread guy, but this stuff was incredible. And now that I’m a San Franciscan and have had the chance to experience local, high-quality sourdough bread, I feel like I know what I’m talking about. The everything seeds were a nice nod to another one of my favorite – the classic New York bagel, but they didn’t really add as much flavor as I would have hoped for.

The butter however, was light and fully-flavored and paired perfectly with the slightly sour bread. I made sure not to eat the whole loaf in order to save a piece or two for the next two dishes which were practically begging to be swiped up by it. 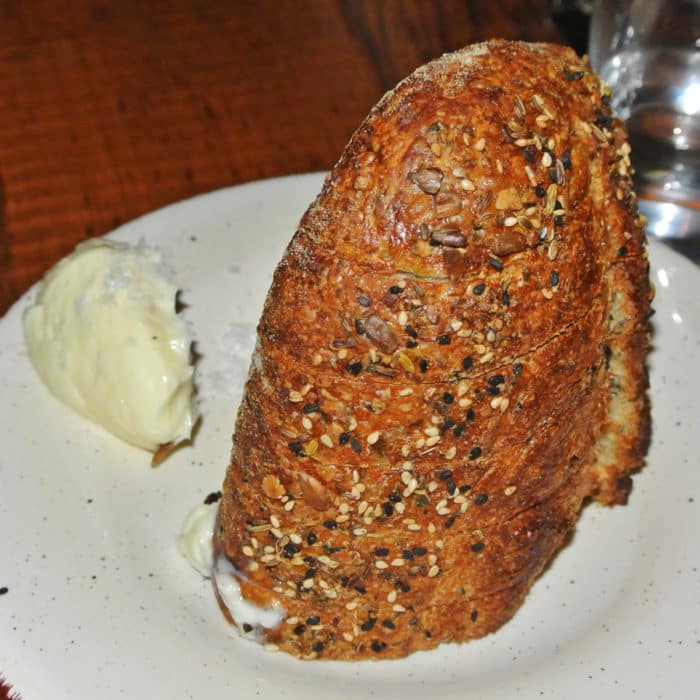 The Hand Milled Grits sounded simple enough, but at Odd Duck they came loaded with a poached chicken egg, large hunks of bacon, mushroom, and bits of fermented pepper. So, we did the obvious thing and popped the egg yolk to let it run all over the thing.

And that bacon? Yeah, it was actually insanely tender pork belly. I freaking LOVE pork belly. The combination of the cornmeal grits, luscious pork belly, egg yolk, greens, mushrooms, and peppers was truly killer. You need to get this dish. 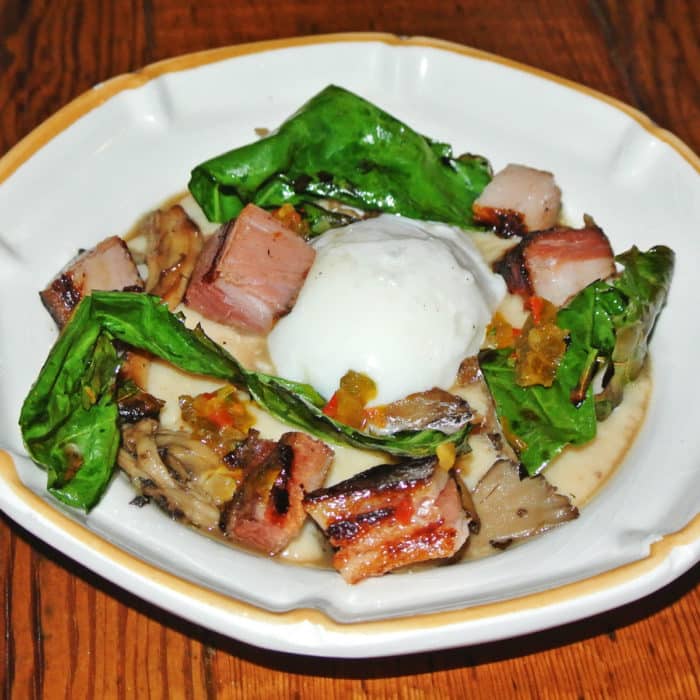 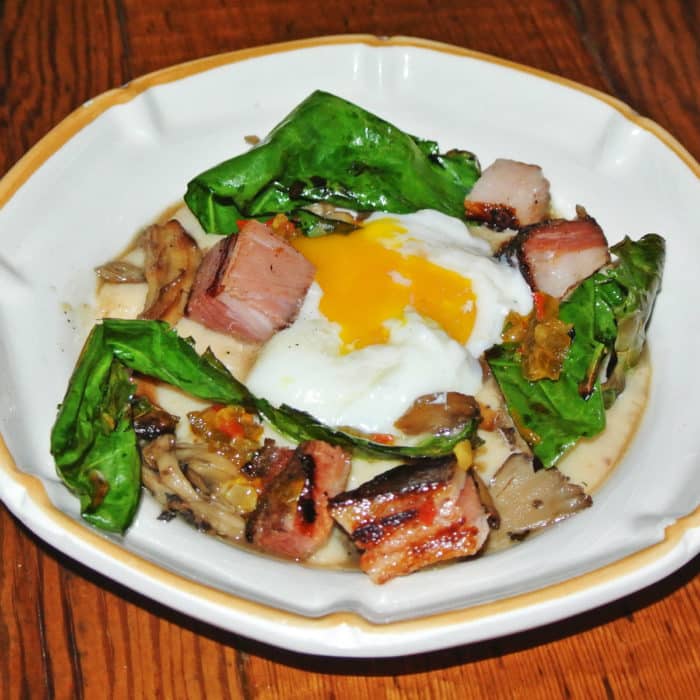 And after that came the Cauliflower Soup which honestly didn’t get me that excited based on the menu listing alone. But, this soup was far and away the best cauliflower soup I’ve ever tasted.

It was rich and creamy with contrasting sharp, bright, and vinegary notes from the green onion and pickled cauliflower. And then there were those crispy golden cheddar fritters floating right on the soup’s surface. Oh my god. Those crispy hunks of cheese would have been outstanding on their own, but here they paired perfectly with the creamy and vinegary soup. 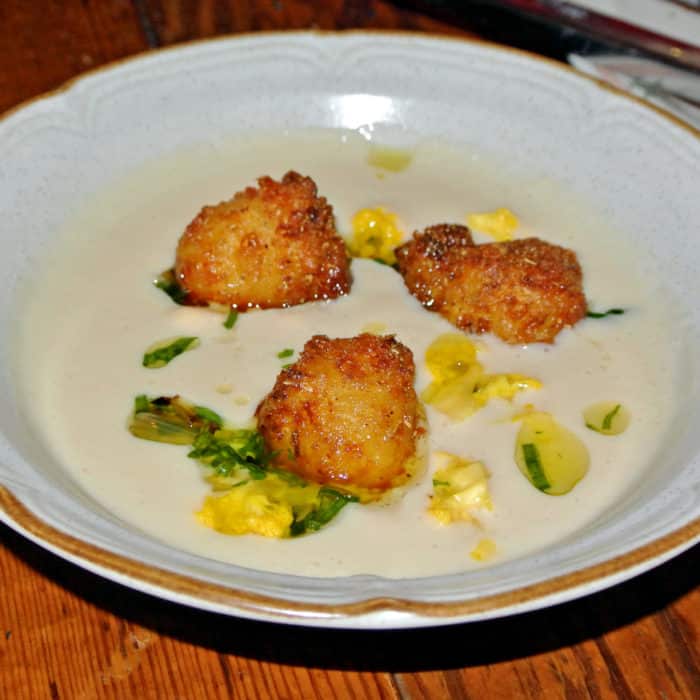 On the other hand, the next dish called Buckwheat Crumpet sounded exciting, but ended up being one of the least memorable dishes of the night.

While I loved the flavors from all of the toppings scattered around the plate which included broccoli, fondue, maitake mushroom, hazelnuts, and a duck egg, I found the dark brown crumpet itself to be a little lackluster. It was basically just a dryish buckwheat English muffin that didn’t add much to the dish and certainly didn’t seem like it deserved to be the dish’s namesake. You can have much better dishes at Odd Duck, for sure. 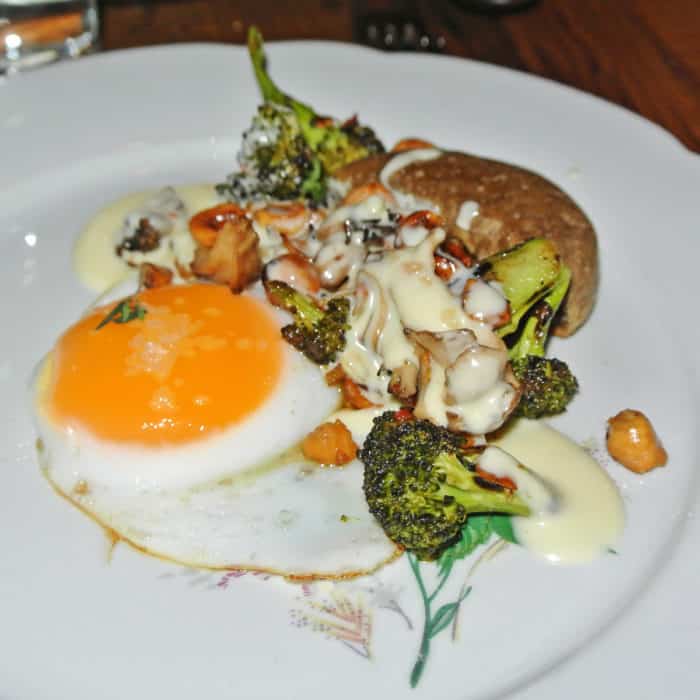 Take for instance the Ceviche which was an absolute knock-out. The fresh, raw fish ranged in color from bright white to pale pink and came dressed in citrus, little bits of apple, harissa, and big deep-fried pork skin cracklins. There was just so much going on – complex flavors and textural pairings that didn’t seem like they should work, but somehow they just did. Get this dish. 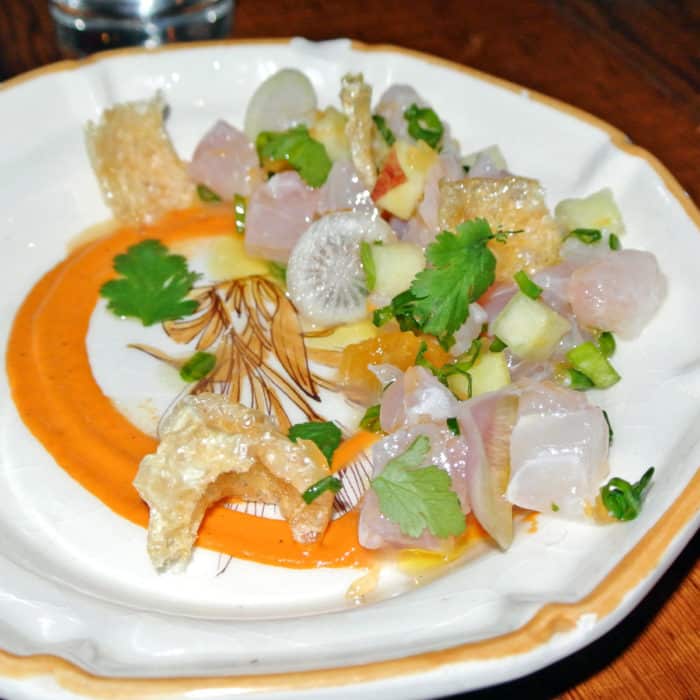 From there, we moved on to the Cast Iron Pintos which were served with cured pork loin, grilled cabbage, and whole lot of sage. I didn’t expect much from this bean-focused dish, but it was actually incredible.

There were just so many bold flavors dancing around in this dish. I loved how the hearty, smokey beans contrasted with the sour, pickled flavors and fragrant, herbal sage. At first, I couldn’t even point out the pork loin separately because it was integrated into the dish so seamlessly and the beans truly were the dish’s hero. This dish was an unexpected overachiever, get it. 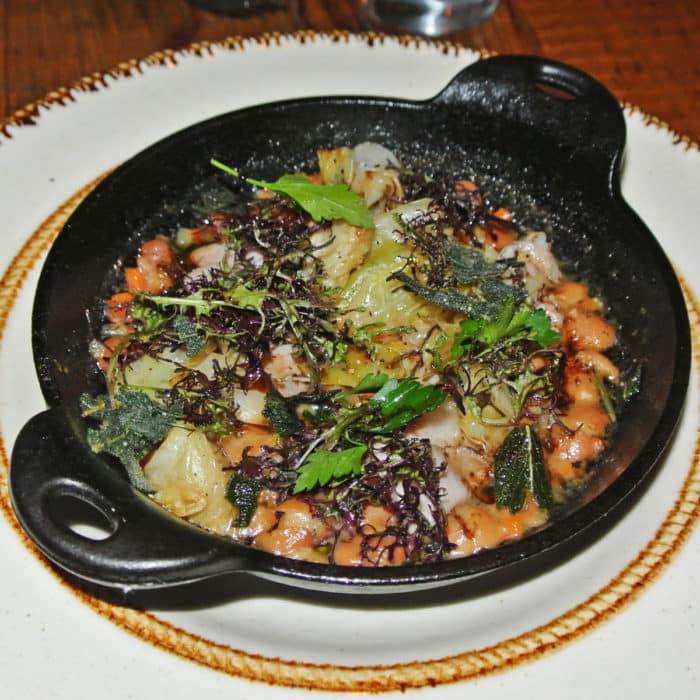 After that, it was time for a dish that I was particularly excited for – the Goat Confit. It was a sort of Mexican-fusion inspired preparation where the red chile smothered goat meat was layered on top of a thin corn masa ‘gordita’.

It was also served along with cilantro, radish, plenty of rich and creamy goat cheese, and a generous sprinkling of salty popcorn. The goat meat was incredibly tender and this whole, strange, flavorful Mexican-inspired dish worked really well. This was another great success. 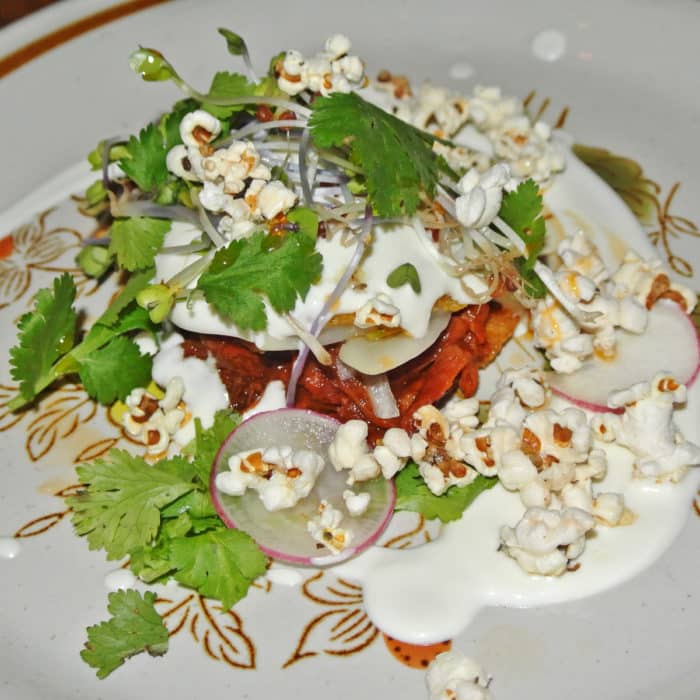 Then we got the Spaghetti which I again didn’t go in expecting much from. It came topped with crumbled fennel pork sausage, our good friend egg yolk, and interestingly – mint. Surprise, surprise. Another ridiculously delicious dish from Odd Duck.

The noodles were VERY al dente and I really loved that toothsome texture. After giving the whole thing a stir it ate sort of like an eggy carbonara with all of that truly meaty sausage busting out that bold fennel-forward flavor. I truly didn’t expect much from a pasta dish at a place like this, but it really was quite impressive. 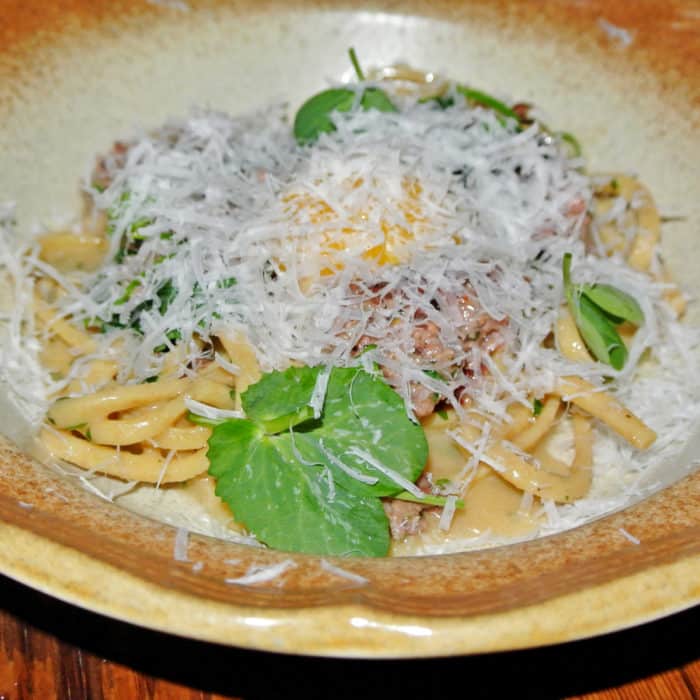 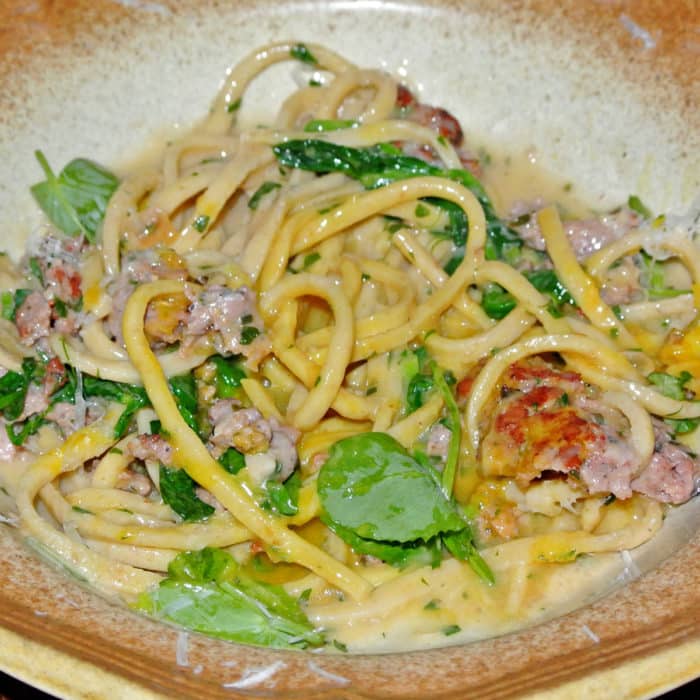 And finally, to close out the meal, one final dish – Foie Gras Pizza. This little pizzetta was topped with crispy potato chips, dollops of creamy hot sauce, sour pickled mushrooms, and of course big creamy lobes of that sinfully good stuff.

The dough’s texture was spot on Neapolitan style and it did an excellent job transporting those wonderfully rich and bold ingredients to my mouth. If this sounds delicious to you, I’m sure you’d love it too. But, if the thought of eating foie is going to get your panties in a bunch, take a pass on it, look the other way and leave more for me to enjoy. 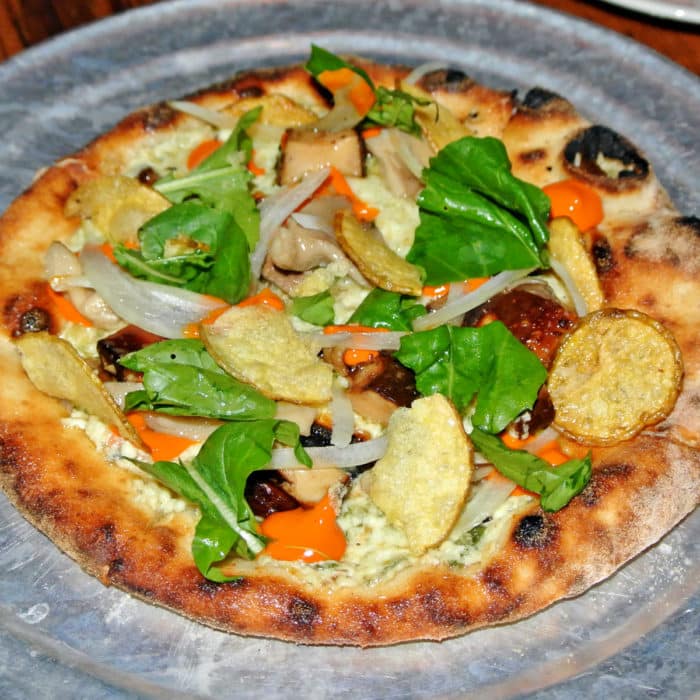 So, I’ve got to say that I was quite impressed with nearly everything we ordered and ate during our meal at Odd Duck. I mean, even the dishes we didn’t love weren’t bad by any stretch of the imagination. It’s just that with so many incredible menu options, you should know which are the must-haves and which are the don’t bothers and that’s what I’m here for. It’s hard to go wrong ordering anything, but the Pretzel, Lamb Sausage, Ceviche, and Goat Confit are absolute essentials. Well done Odd Duck!

Got another incredible Austin restaurant I need to check out next time I’m back in town? Let me know in the comments below.