By reputation, Bob’s Donuts is known for making the very best doughnuts in San Francisco. That’s a huge reputation to live up to and I’m lucky enough (or unlucky enough depending on how you look at it) to live only one block from the place to be able to put it to the test. I already knew that late-night was the time to go because between 11 PM and 2 AM is when they make all of the doughnuts fresh for the next day’s batch. That’s also when all of us Polk Street drunkards are craving deep-fried doughnut sweetness.

Sure enough – because this is of course San Francisco – even at around midnight when we arrived, there was a line snaking out the door. It really only took about 15 minutes before it was our turn to place our order, but still I don’t love waiting in lines. But even waiting in line was pretty entertaining because I got to watch the old Asian couple use really old-school machinery to pump out batter in the bubbling deep fryer – making fresh doughnuts right before my very eyes. It was pretty much the ultimate torture watching those doughnuts fry and get glazed while I was forced to wait, but it was ultimately worth the restraint because with just a little bit of patience you too will get to consume one (or more) of those ridiculously fresh fried dough balls. 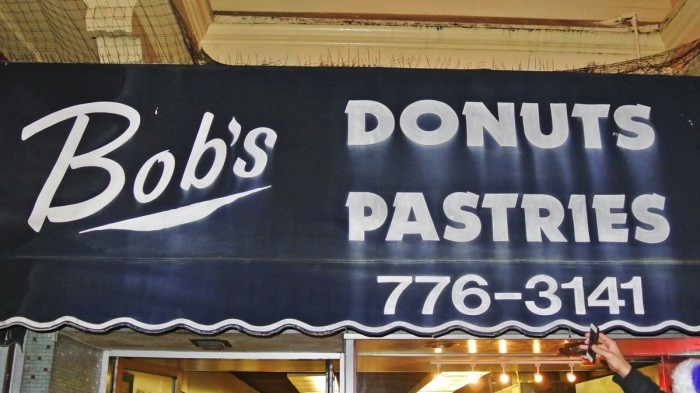 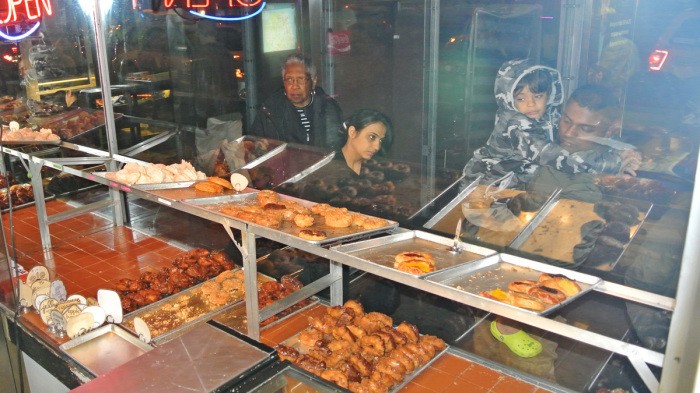 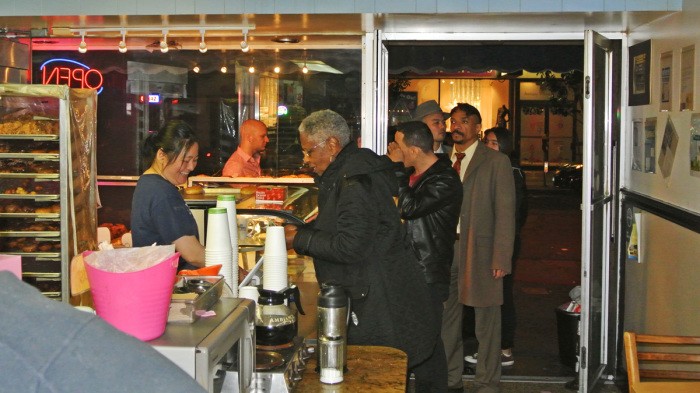 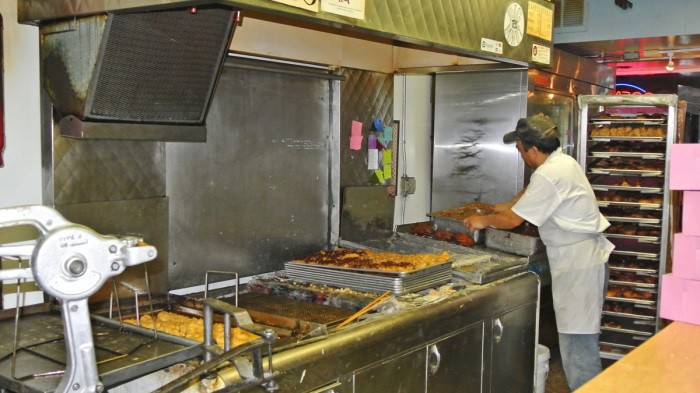 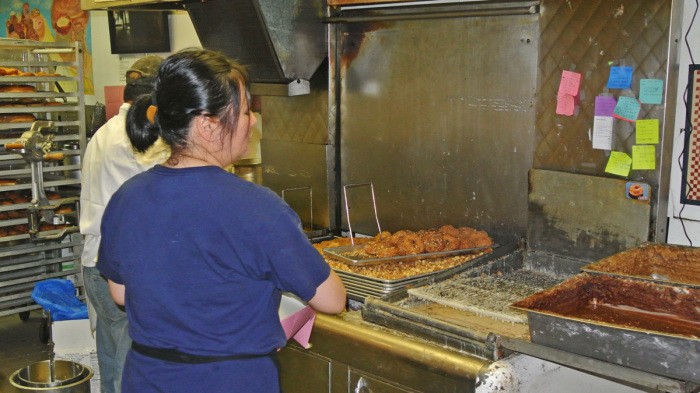 Once we reached the register, we asked the lady which doughnuts were the freshest. One of the three listed was the Sour Cream Doughnuts and I just knew I had to have one. I already knew that this throwback doughnut recipe makes some of the moistest cake batter possible.

And the process of transforming it into a doughnut gives it one of the crispiest, crackliest exteriors imaginable along with a fully-loaded layer of icing covering all of the nooks and crannies. As I took my first bite, I was overjoyed to find that it was still warm on the inside. The sour cream batter added just the slightest pleasant twinge of sourness to the cake. This was truly magnificent, especially at midnight after a night of bar-crawling. 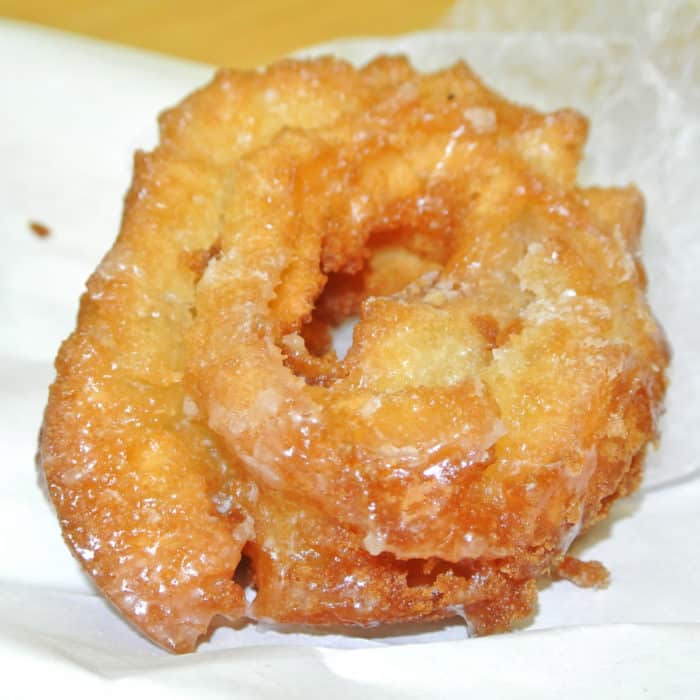 And even though it wasn’t also coming straight out of the fryer, I just couldn’t resist also trying their version of one of my favorite pastries in the world – the Apple Fritter. I’d heard great things about this sweet treat before, so I just couldn’t pass up the opportunity to experience more of Bob’s greatness.

The hulking pastry was a deep coppery brown and was massively portioned with a glaze that glistened seductively in the night. Folded into its many moist, doughy layers were heavy shakes of cinnamon and real, large hunks of tender-baked apple. But, the most incredible thing about this treat was the uncanny lightness that they were able to achieve with what is usually such a ridiculously dense, doughy, leaden dessert. This was another real winner and probably the best apple fritter I’ve ever had. 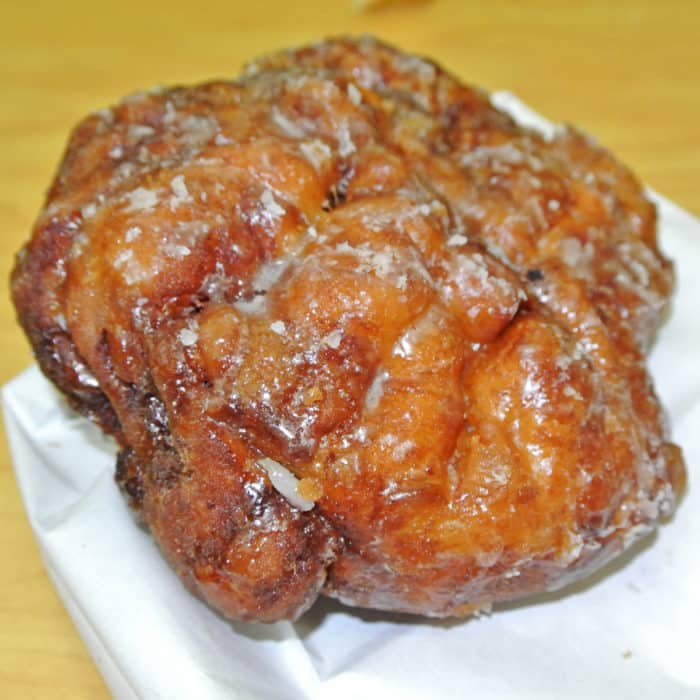 So, I know it sounds kind of crazy to wait in a 15-20 minute line late at night just for a doughnut, but trust me, you’ve just got to do it. When you do it, you’ll understand. The experience of eating one of these doughnuts fresh out of the fryer was – well – simply life changing. They really were that good. And yes, the next day I really did hate myself for crushing both a doughnut and apple fritter late at night, but it was soooooo worth it.

Got another incredible bake shop in San Francisco that I need to check out? Let me know in the comments below.