So, there I was. Back on my quest for great and reasonably priced sushi. This time, I didn’t want to go further than a five minute walk from my apartment, so I did a quick search of the radius and landed on a little spot tucked away on Van Ness called Wayo Sushi.

It would be very easy to miss such an unremarkable looking place on such a heavily vehicle trafficked road, but I’m glad I stopped in. There, you’ll find a married couple – the man behind the centrally located sushi bar and the wife dashing around the place handling service. They run the place in quite a serene and calming manner in line with my expectations of a great sushi joint.

Just beware: because it’s just a single guy behind the counter making sushi, if the restaurant fills up, it might take a while to receive your food. This actually wasn’t my first time stepping into the restaurant. On my first try I walked right up to the sushi bar and was quoted an hour for food so I moved on. But, this time, with fewer seated patrons, I was able to step right up, grab a seat, and have my food prepared immediately.

The menu is pretty straight forward and includes a variety of standard and traditional sashimi, nigiri, and maki rolls. These days, I’ve been much more inclined to order the types of traditional dishes as opposed to the more unusual Japanese-American sushi creations, so I was perfectly happy to pick from their selection. 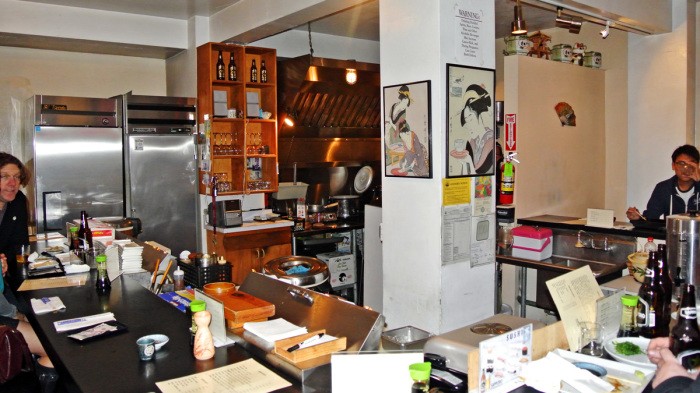 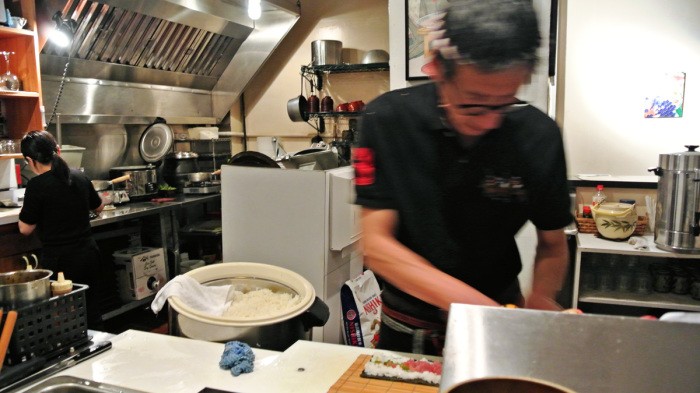 I started off with an order of two pieces of Sake (Salmon) Nigiri, two pieces of Hotate (Scallop) Nigiri, and a six piece Spicy Tuna Roll just to get a sense of what the place was capable of. I was seated directly in front of the sushi chef, so I got a little bit of a show while my sushi was prepared – which I loved. Very quickly, he had expertly assembled each of my excellent looking pieces and plated them directly in front of me.

The two varieties of nigiri were truly excellent. The fresh, oceany cleanness of the scallops highlighted the Hotate Nigiri and the subtle, but present addition of creamy kewpie mayo and a sprinkle of orange fish roe were both pleasant additions.

The salmon on the Sake Nigiri was equally as fresh and lusciously textured as the scallops were. Even the rice in these nigiri pieces was impressively well-formed and cooked. I’d definitely say that these nigiri pieces are an excellent deal at only around $5 for each pair.

The Spicy Tuna Roll was also quite good and was actually much different than the spicy tuna rolls I frequently see made elsewhere. I watched as he assembled the roll by hand, first laying out rice, then seaweed, then shaking chili powder, and spreading plain rough chopped red tuna along the bed of rice with a sprinkling of green onion. No, they don’t have one of those mysterious, creamy, mayo-laden spicy tuna mixtures laying around at Wayo Sushi. It was all done right and was made fresh to-order. It was indeed both spicy and delicious. 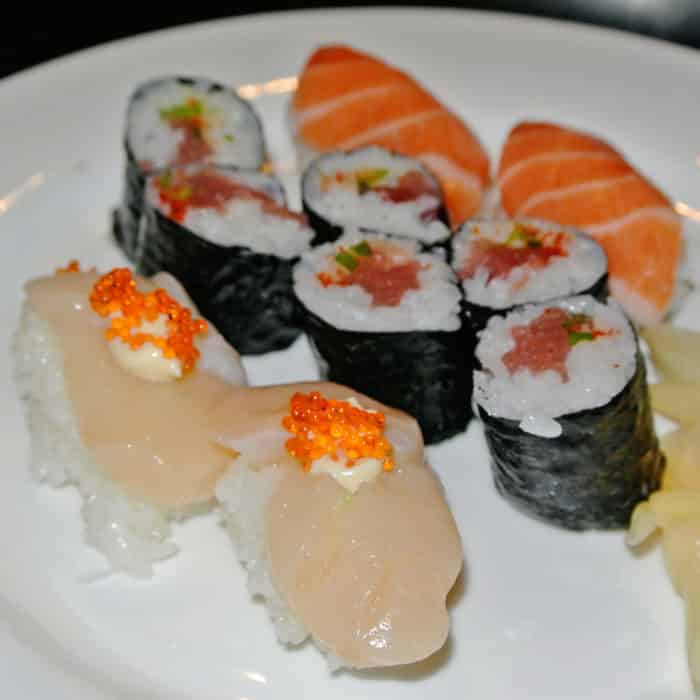 Oh yes, one other very important thing to mention. At Wayo, the chef pretty much always applies a generous dap of wasabi directly to each an every piece of sushi, even the nigiri. So, if you don’t like wasabi, you may need to request your order without. I don’t mind it, but knowing this, I know not to add any additional wasabi to my soy sauce or pieces.

Anyway, while I was still chowing down, I watched as the chef prepared a selection of chef’s choice nigiri for another customer. My eye was caught by the absolutely gorgeous, bright red Maguro (Tuna) Nigiri so I knew I had to add on a two piece order at the end of my first round. Unsurprisingly, that beautiful looking tuna was excellent and as fresh as can be. Once again, I noticed the sinus burn of wasabi that had been applied to the rice beneath the layer of fish, perhaps a little too strongly actually. These pieces were really very good, but I might consider requesting no-wasabi next time. 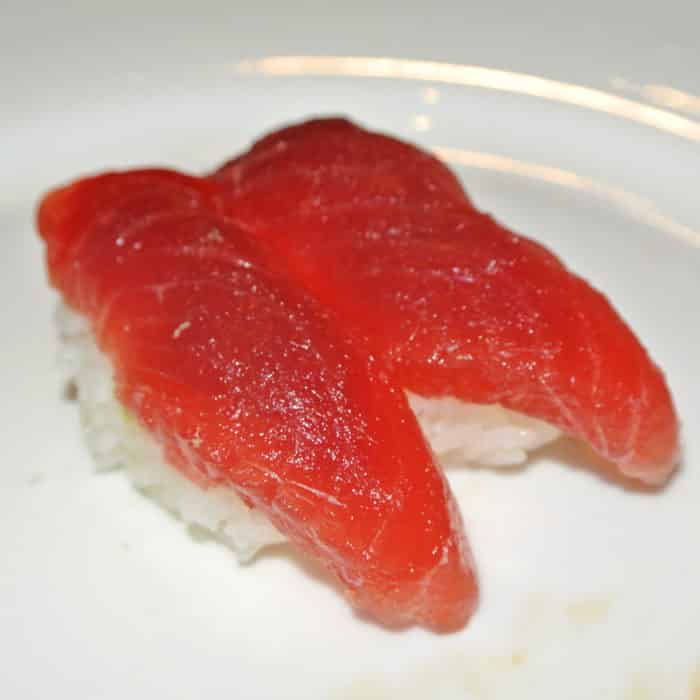 On subsequent visits, I’ve tried a few more of their offerings such as Saba (Mackerel) Nigiri and Shiro Maguro (White Tuna) Nigiri. Once again, I was not let down by the quality of the fish and that Saba at only $4 for the pair was a really excellent deal. It’s a touch on the meatier side for sushi, but I still enjoy the change of pace and texture and the Shiro Maguro (White Tuna) was incredibly tender and delicious, as I’ve learned to expect at Wayo. 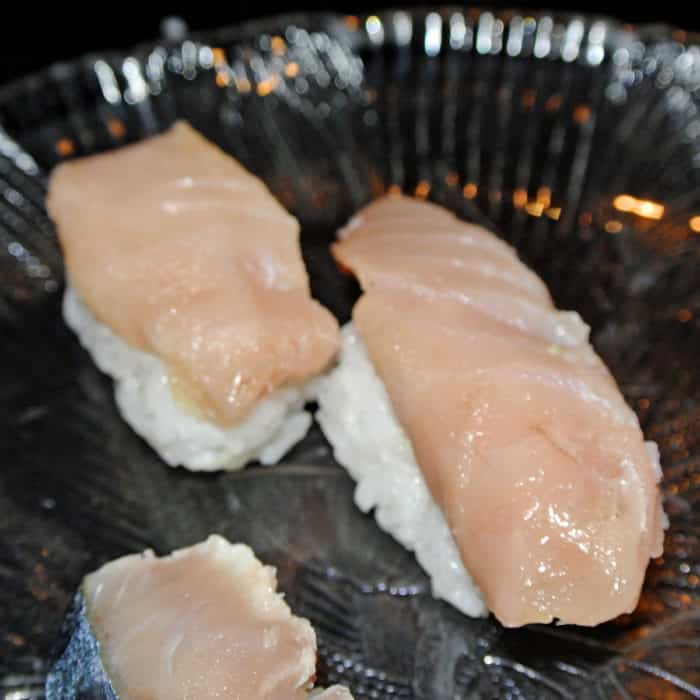 And now that I fully trust the chef at Wayo, I knew I could order something I really don’t order just anywhere – a California Roll. Ordinarily, I avoid this prototypical basic bitch sushi roll, but at Wayo they use REAL crab meat. There’s none of that fake-fish pasty crab stick garbage in their California Roll – just real sweet crab meat and freshly sliced avocado in simple perfection together. And it makes sense – this is after all the land of super-fresh Dungeness crab. 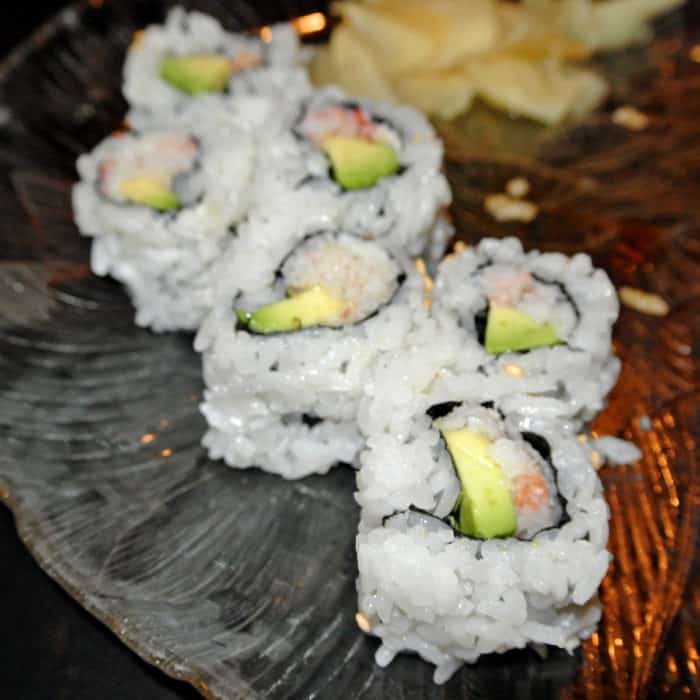 And finally, a pick involving cooked seafood – the Rock’n Roll. It’s essentially just an eel and avocado roll, but the chef has a little BBQ oven at his sushi station that he uses to great effect to heat and crisp the meaty slices of eel to order before adding them to the roll. At Wayo, it’s all about the simple things, just done really well. 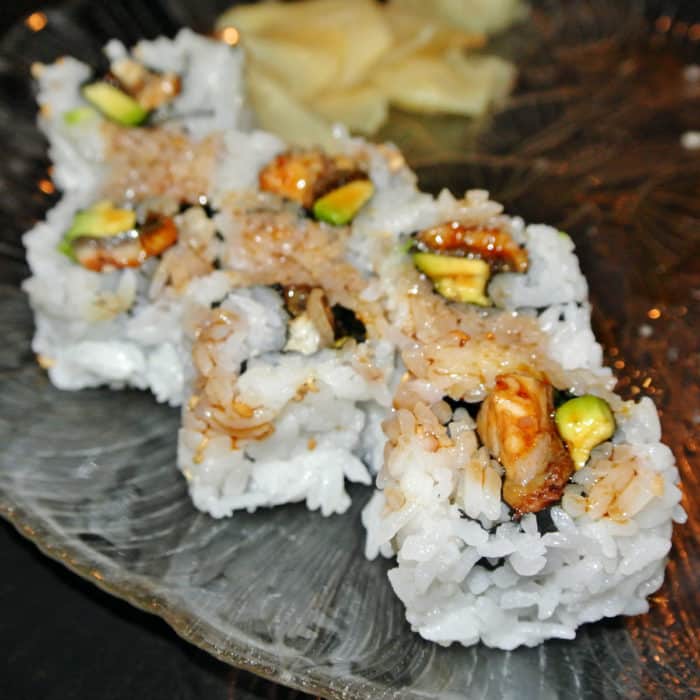 So, I’m happy to say I’ve found a really excellent and reasonably priced sushi joint in my neighborhood. I don’t know if I will always be able to rely on Wayo when the craving strikes since they only have one chef and the wait times can sometimes get long. But, when time permits I’m sure I’ll be enjoying plenty more of this deliciously fresh and cheap sushi in the future.

Got another great, low-priced sushi joint in the Lower Pac Heights area? Let me know in the comments below.