Holy crap this place is in a bad neighborhood. Sai Jai Thai is situated on a really terrible block right in the heart of the crackhead-riddled Tenderloin. But, I’ve done crazier things than venture into a sketchy neighborhood for a good meal, so that alone certainly wasn’t going to deter me from checking the place out.

From the outside, it wasn’t much to look at. But, inside the place was nicely decorated and was quite cozy, though there was definitely a rather insane and hectic energy throughout the place due to the staff’s rapid shuffles in and out of the open kitchen. I also encountered an unrelenting constant clatter of forks, woks, and other metal clanging noises regularly and rhythmically beating over the static buzz of fire and steam plumes every couple of minutes. And to be honest, that’s kind of how I like my casual Asian spot to be – fast and rowdy as long as they’re also freaking delicious. 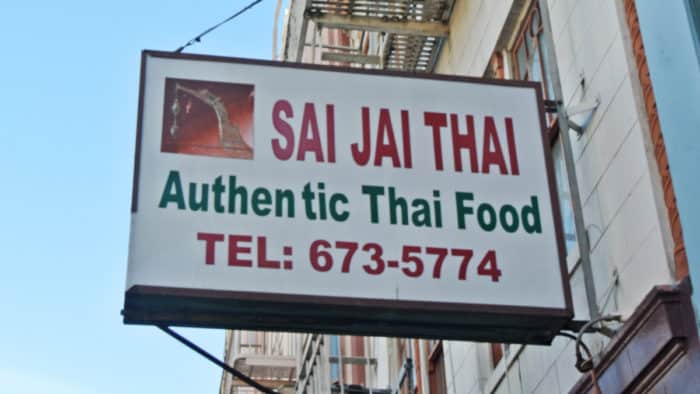 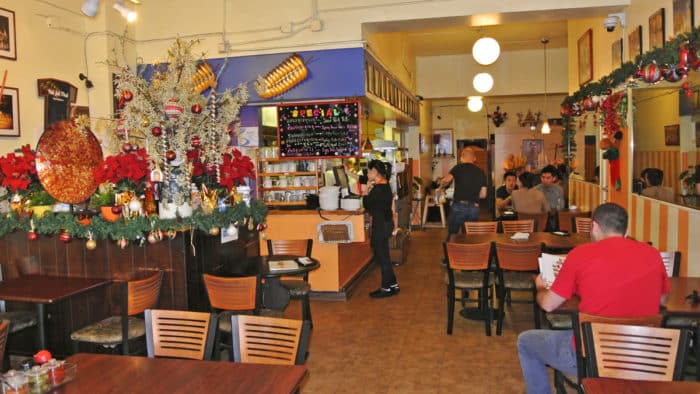 Before even entering the place, I knew exactly which dish I was going to order. They’re pretty well-known for their sliced pork shoulder which is offered in a variety of preparations such as over rice, salad, or a la carte. I went right for the most famed version – served over fried rice – called Kao Pad Kor Moo Yang.

It couldn’t have been more than five minutes before a gigantic platter of fried rice and topped with absolutely gorgeous-looking sliced meat was plopped right in front of me and I couldn’t have been happier with it. The fried rice was unbelievable – some of the fluffiest I’ve ever had. The rice was definitely fairly plain on its own – simply studded with yellowish eggy bits – but when combined with those large, meaty, moist, tender, char-grilled pork shoulder slices and when doused in that red, bold, spicy, herbal, vinegary sauce the entire dish really came to life.

Kao Pad Kor Moo Yang is comfort food, plain and simple. The rice was great, the pork was great, and the sauce was great. It was simple ingredients put together in simple, but perfect ways. And it only cost a mere $8.25 for the satisfyingly filling platter. This was exactly what I was looking for and it fully delivered on its reputation as a must-eat dish in San Francisco. 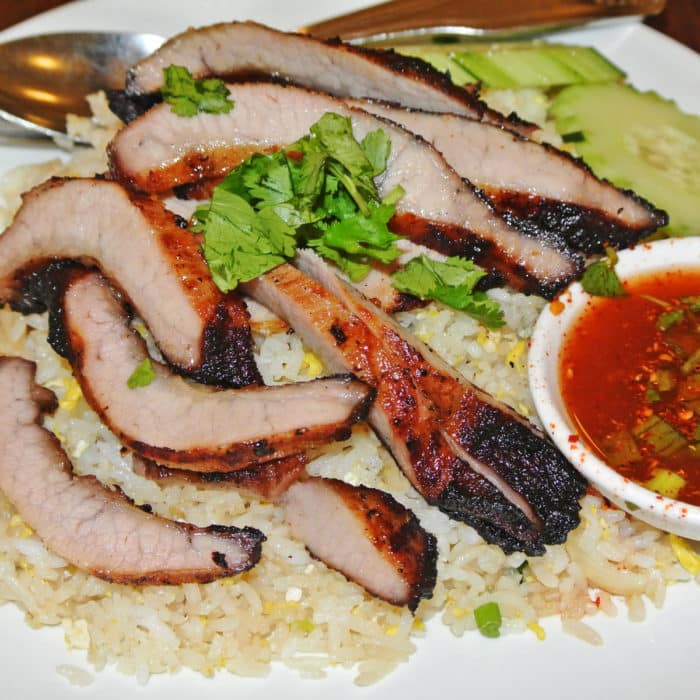 So, even though the neighborhood is pretty rough and it’s not particularly fun to get to Sai Jai Thai, I think it’s still worth a venture through the ‘Loin for such a good meal. Sai Jai Thai’s famed Pork Shoulder Fried Rice was everything I had hoped it would be – I’ll definitely be back for more when the urge for this simple comfort strikes again.

Got another great reason to venture into the Tenderloin? Let me know in the comments below.