Pao! is very tiny and for the longest time it was unknown enough that I could stop in on any random night and know I could grab a table, but now you’d be better off with a reservation. On more recent visits, Pao! has constantly had every one of its few tables full. And not just full of ordinary people either. It was the SoHo chi-chi model crowd. I really didn’t think those types ventured out this far west. Well, if the secret wasn’t already out about this place (it was), it definitely is now.

Pao! features a unique and distinctly Portuguese menu and has a nice selection of unusual Portuguese liquor-based cocktails and wines. I’ve had some of the cocktails featuring Aguardiente there in the past and enjoyed them, though I usually prefer to get a bottle of Portuguese wine when I’m dining in. 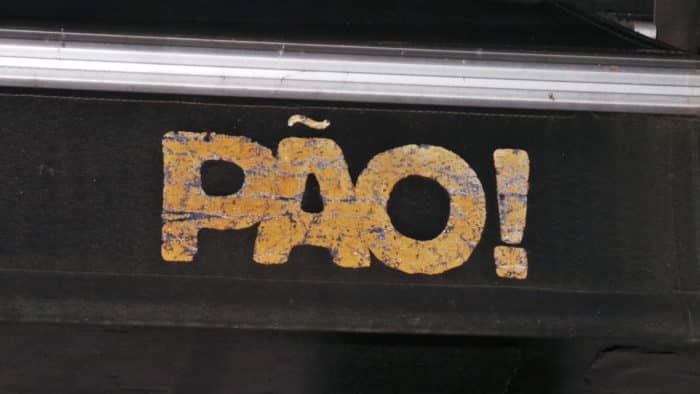 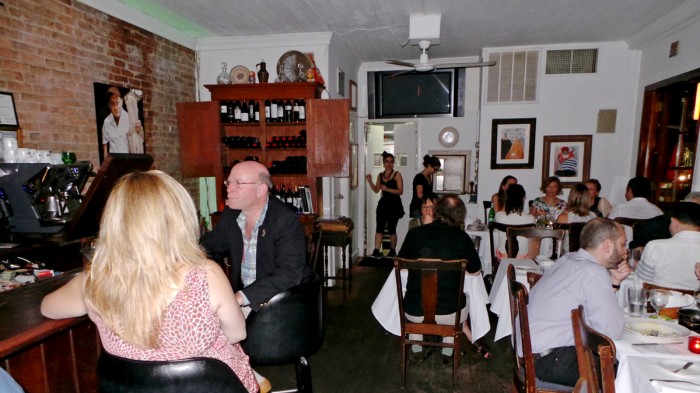 Amy and I started off this particular meal with a scallop appetizer called Vieiras em Tomato com Xarope de Porto which takes tender and deeply seared scallops and serves them over a beautiful looking tomato compote with a pleasant port wine topping. This dish is definitely on the light side flavorwise, but its really a sight to behold and I still really enjoy it every time I come. It’s a mild preparation that really allows the properly pan-seared scallops to shine to their fullest. 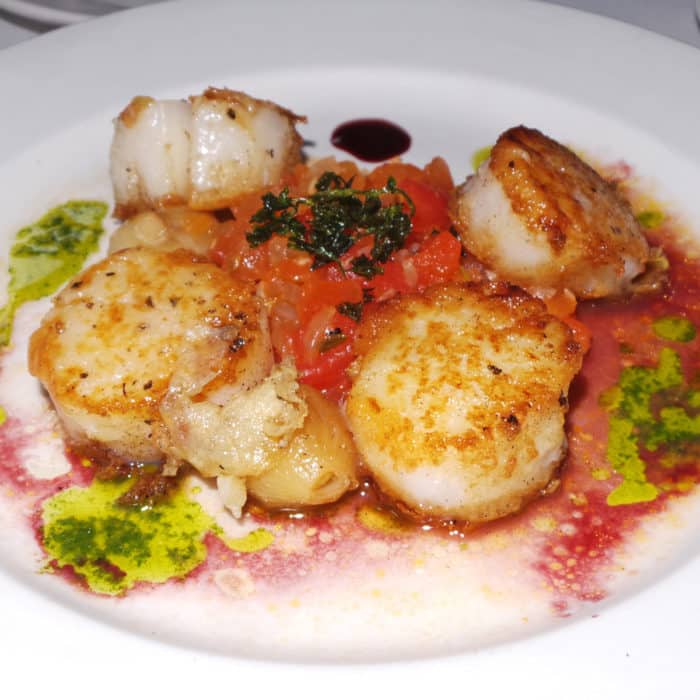 For Amy’s main, she went for a dish called Pargo com Espuma Batata which takes a snapper filet, encrusts it with something crunchy and delicious I can’t quite put my finger on, and serves it over – are you ready for this – a heaping bed of whipped truffle mashed potatoes. I bet you’ve never thought to pair fish with mashed potatoes before.

It doesn’t sound like it should work, but somehow Pao! manages to pull it off. The mashed potatoes were whipped until they became light fluffy and tasted strongly of truffle oil. I’m sure you’ll love them if that’s something you’re into. And somehow this bold, hearty concoction manages to not overshadow or overpower the deliciously crispy, flaky white fish. The whole thing is pretty brilliant if you ask me. 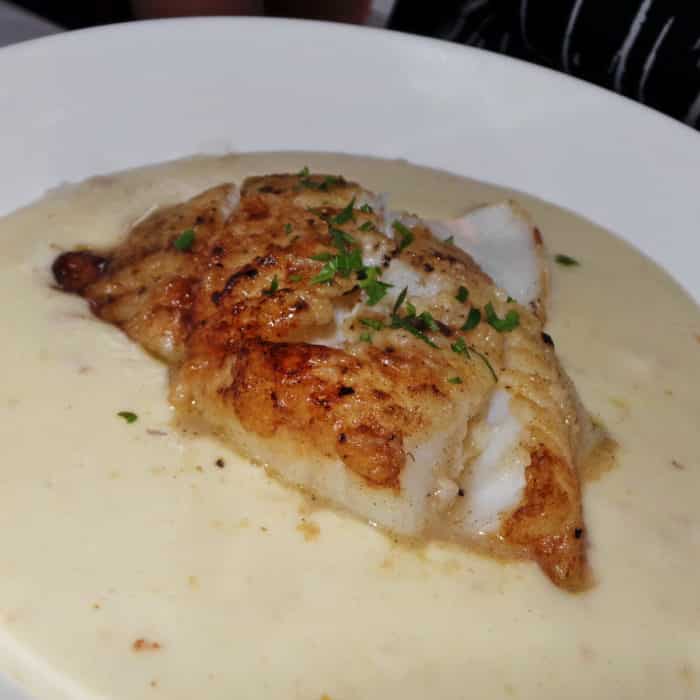 Then, I did something a little clever. In the past, I’ve ordered one of their full-sized entrees called Gambas com Açorda that places five gigantic tiger prawns over a really unusual creation they call shellfish bread pudding. In my opinion, the best part of that full-priced entree is the totally bizarre-sounding bread pudding and I noticed that for only $4.50 I could get that part alone as a side dish. Jackpot, that’s exactly what I did. I’d hate to call it a lifehack because I hate that term, but I guess that’s exactly what it was. I hacked Pao!

There really is no way to understate how strange this dish called Açorda is. It has a rich, creamy, custard texture just like you’d associate with the traditionally sweet dessert. But, in this savory preparation, an overwhelmingly oceany seafood flavor dominates the profile by the plentiful inclusion of sliced squid and clams. I’ve really grown to love the dish, though I can see why it might not be for everyone. 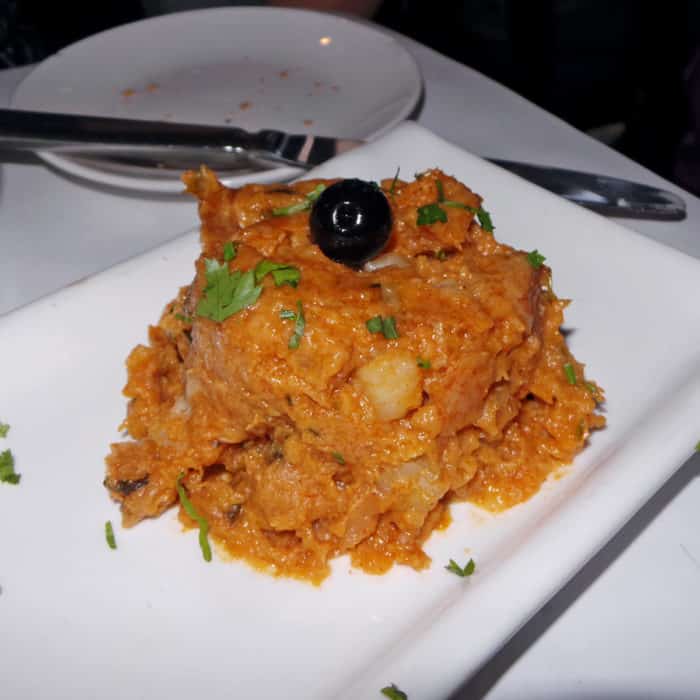 And in the same way as the Açorda, I can imagine my entree is also probably pretty polarizing. Personally, I love Pao!’s Bacalhau à Bráz but shredded salt cod formed into a cylindrical mound with scrambled eggs may not be for everyone. Interestingly, this seemingly lowbrow dish is served on a gigantic white plate surrounded by a moat of potato sticks and greens and comes capped with a single black olive. I’m sure everything about this dish sounds strange, but honestly it all works really well.

Both the dish’s flavor and texture could easily be described as unusual or even unpleasant to the unfamiliar, though both aspects are actually relatively mild if you really stopped to analyze them. This dish tends to be a touch salty and I actually really like its strange mouthfeel, though perhaps not everyone would feel the same way as I do about it. 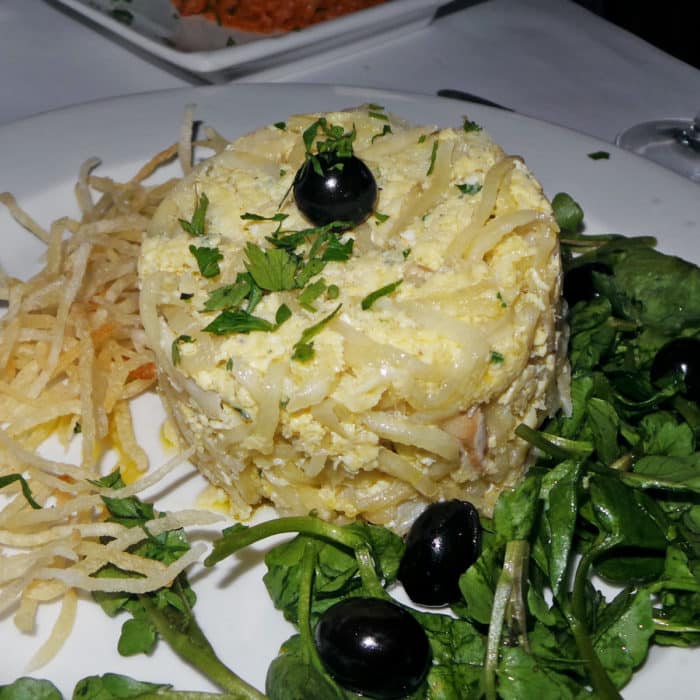 So if you’re looking for a new date night spot in Downtown Manhattan a little off the beaten path, check out Pao! This tiny West SoHo restaurant may have turned into a go-to for the cool-kid model crowd, but the food is still as ridiculously unusual and lovable as ever.

Got another truly unusual ethnic date spot in NYC I should check out next time I’m in town? Let me know in the comments below.