Amy and I have always been hot dog lovers. All it really takes is a simple, well-cooked, snappy mustard covered link and we’ll be perfectly happy, but give us something crazier and we’re bound to fall head over heels.

On this particular weekend, we found ourselves in the Westport, Connecticut area for a wedding and *gasp* got hungry for some lunch. A quick search of the surrounding area and we came across Super Duper Weenie in Fairfield where they serve a vast menu spanning the many regional hot dog topping styles and preparations across the US. How could we possibly pass on the chance to check a place like this out?

Actually, this place is quite popular and pretty well known even outside of the Connecticut area. Guy Fieri may be a bit of a douche, but I do have to give him and his staff credit for constantly finding great eateries such as this around the country to feature on his super-popular TV show Diners, Drive-Ins, and Dives. Super Duper Weenie has been included there along with in a number of other well-known publications. This place may have been a secret at one point, but it’s certainly not any more.

The whole place has still managed to maintain its low-key no-frills kind of vibe though, and I appreciate that. The menu is posted on the wall and you order from a counter then can choose to grab a stool at the 1950s style diner counter or at one of the picnic tables in the back cabin-like room. We opted for the latter. 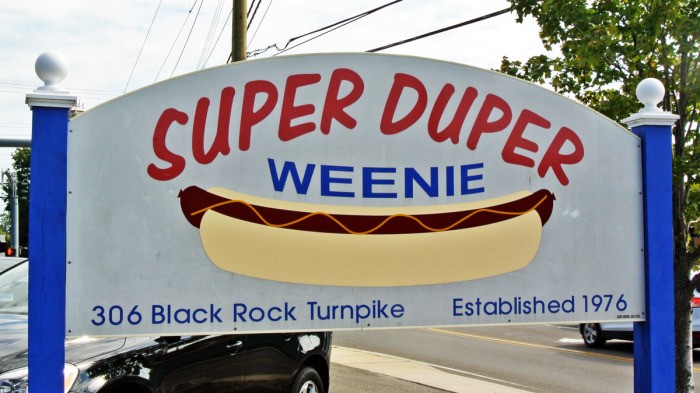 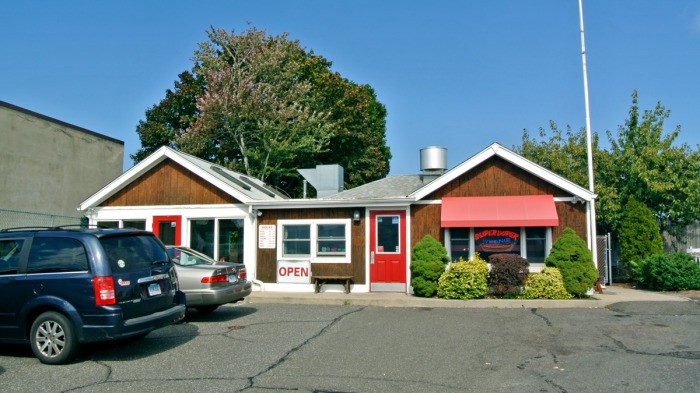 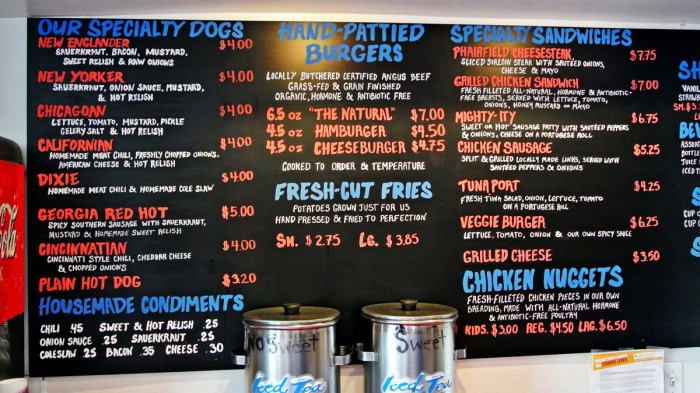 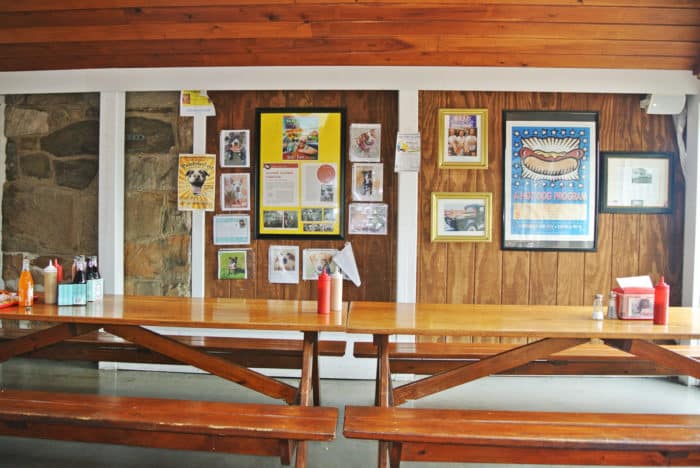 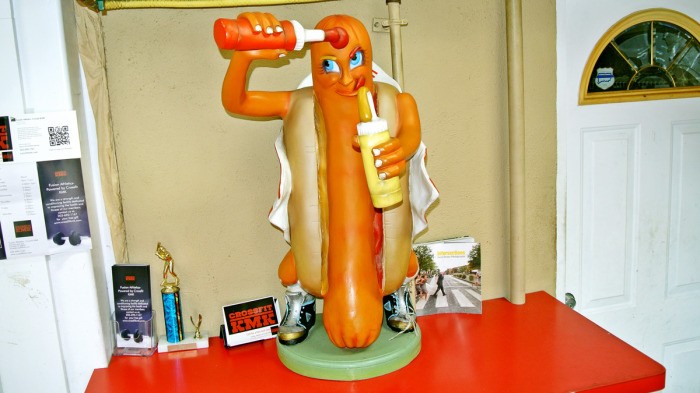 For our meal, Amy and I chose three hot dogs – a New Englander, a Californian, and a Cincinnatian – along with a small fry. This seemed like the perfect amount of indulgence for our lunchtime meal. And yes, it was indulgent.

There are really two key elements that make all of these dogs so damn good. First, they slice the hot dogs in half and cook them on a flat-top grill so twice as much surface area gets nice and crispy.

Second, they make pretty much all of the fixings fresh in house daily, which elevates all of the eclectic hot dog recipes to the next level of awesomeness. When you bite into any one of these killer creations, the quality and care taken to make every topping really shows. Really, no matter which dog you choose, you’re gonna leave happy. 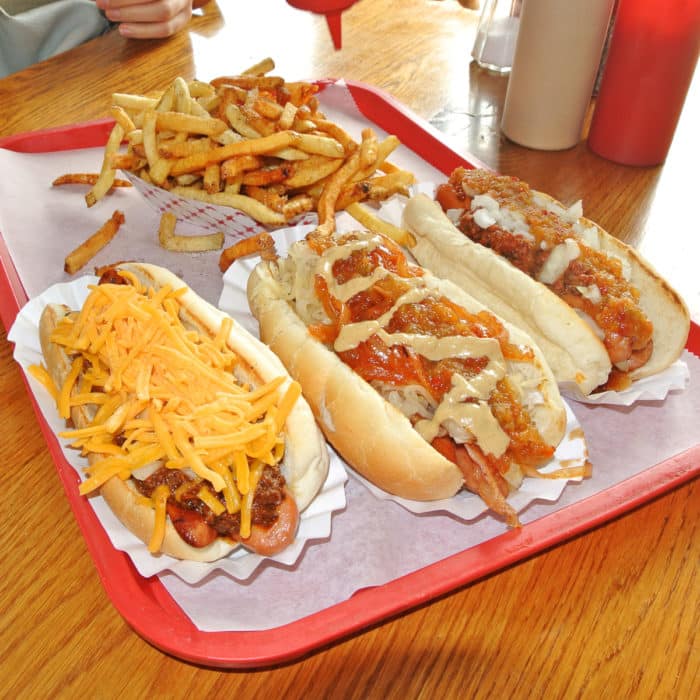 Well, I said we chose the famed The New Englander because I thought that’s what we had ordered. Instead, I think they gave us The New Yorker, which has a pretty similar recipe but wasn’t exactly what we expected to receive. We wanted to try the New Englander mostly because it seemed to be their most popular menu selection, but all wasn’t lost because the New Yorker was absolutely delicious.

It was bright and fresh-tasting and had a vinegary bite along with a relatively restrained heat from the red chile flakes and pickled cherry peppers built into the mix. This was a great topping and combined well with the beefy hot dog and kraut, but I’ll let it slip – this dog ranked in third place amongst the three we had. 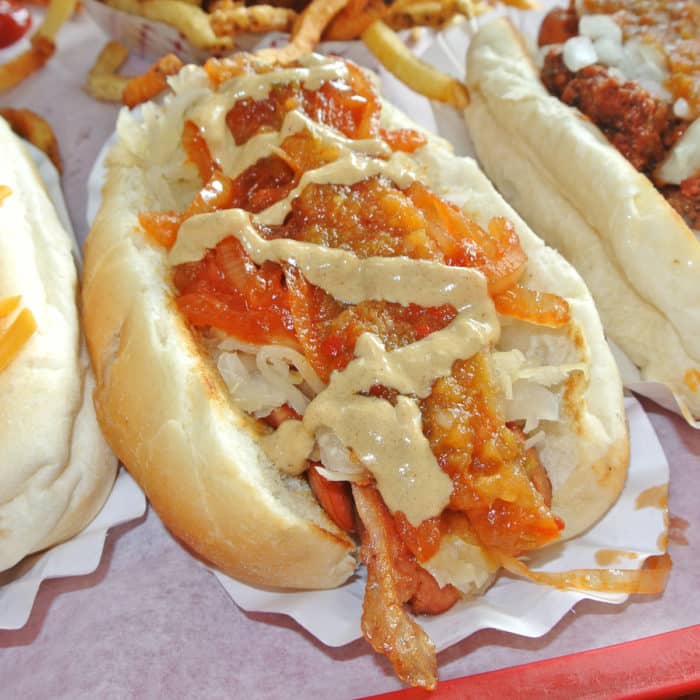 Next up was The Californian which was topped with homemade meat chili, freshly chopped onions, american cheese, and that hot relish. This classic chili dog combo worked really well and why wouldn’t it? The thick, chunky, meaty chili was just like the kind I grew up eating and that melty american cheese solidified the memory. With the sharp bite of the raw onions and vivid kick from that same hot relish from The New Yorker, this was a damn good chili dog.

But best of all was The Cincinnatian which came topped with Cincinnati style chili, cheddar, and raw onions. Though this was probably the least visually appealing of the bunch and seemingly the most straight-forward, we both agreed that it was actually our favorite one to dig in to.

This hot dog was particularly snappy, but I think that superiority may have just been coincidence. Honestly, it was that wonderfully unusual Cincinnati style chili that really made it for us. Unlike the traditional chili included with The Californian, this variety had a really unique flavor profile that tasted like cinnamon, cloves, allspice, and chocolate. With the addition of simple unmelted cheddar cheese and raw chopped onions, it allowed the flavors of that wildly peculiar chili and snappy hot dog to shine to their fullest potential.

See what you’ve done Super Duper Weenie? Now I have to take a trip to Cincinnati to go chili crawling!! 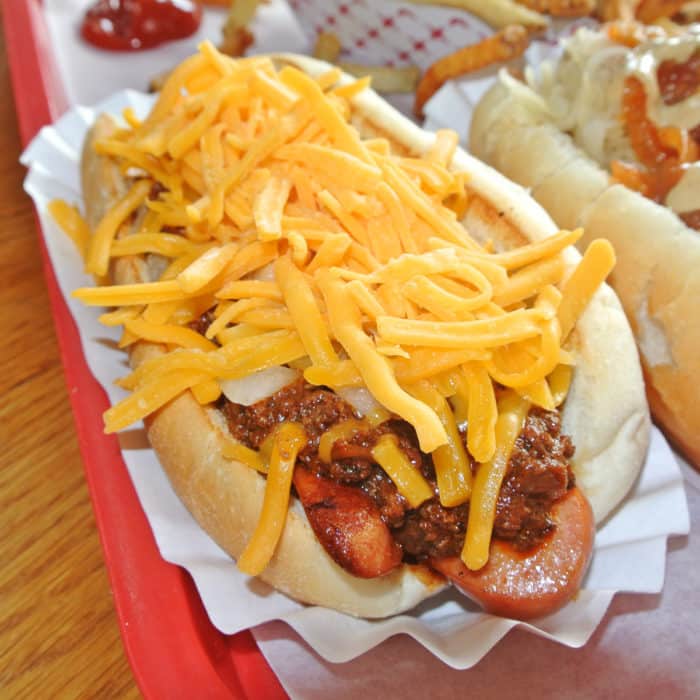 To round out the meal, we went for an order of the much lauded Fresh Cut Fries. I’m frequently disappointed by french fries that I’ve trained myself to never expect much, but these actually lived up to the hype and were an excellent example of how truly excellent simple, freshly made fries can be. They were skinny, they were crispy, and they were well-salted and peppered. Dream on McD’s. You wish your fries were this good. 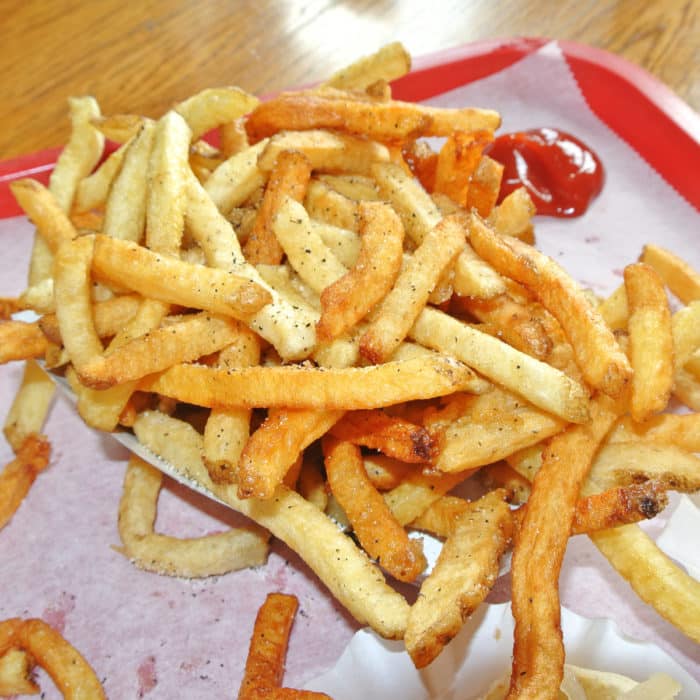 So if you find yourself in the Fairfield, CT area seeking a delicious, casual, and quintessentially American meal, head to Super Duper Weenie. I don’t know what super powers chef and owner Gary Zemola is using to perfectly emulate all of these regional hot dog styles, but all the more power to him. Bless you Gary Zemola. May the Weenie Gods smile down on you.

What’s your favorite regional hot dog style? Let me know in the comments below.