As a recently departed New York Jew on his way to San Francisco, one of my biggest concerns about the relocation was the ease of access to quality Jewish deli meat. I kid you not, I was really worried. I’m happy to report that this is no longer a concern for me as I’ve found Miller’s East Coast only a few blocks from my new San Francisco apartment and it is able to completely fill that gaping void in my life.

I’ll admit it, I’ve got high standards when it comes to pastrami. And I’ve been spoiled by the proximity to Katz’s, Harold’s, and even Mile End amongst many many others while in NYC. I’ve had them all enough times to know love when I’ve seen it. Hello, my name is Mike Winston and I am a pastrami addict. Come on now, we’ve all seen When Harry Met Sally. Great pastrami can be orgasmic.

Stepping inside Miller’s, you’ll be greeted by a lot of the same usual kitschy cheesiness you find at most of the East Coast deli heavy hitters. The wall decor is made up mostly of gaudy, brash, colorful signs loaded with corny slogans and sayings as well as wallpaper that has a sort of 1950s malt shop newsprint aesthetic. This is not a fancy sit-down spot. It’s a place to eat a heaping pile of deli meat on a sandwich while sucking down a can of Dr. Browns and it’s perfect for doing just that. 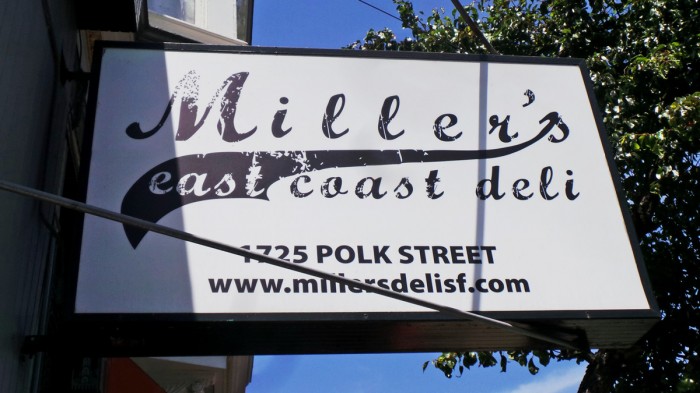 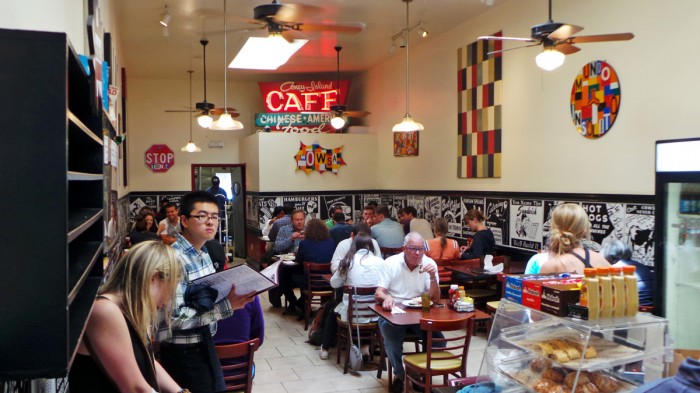 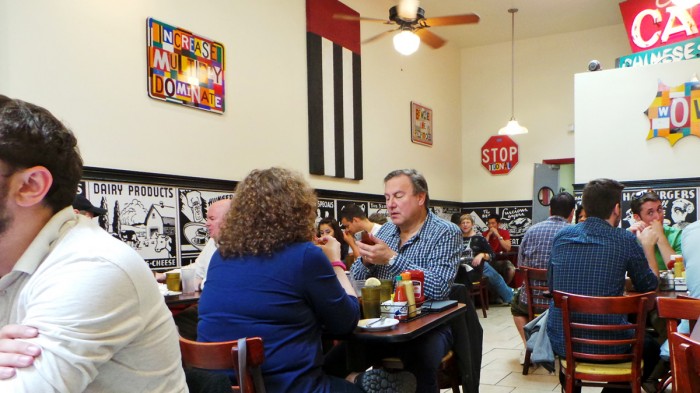 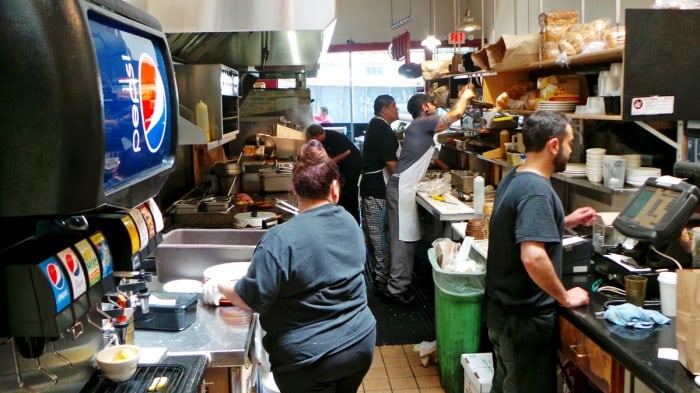 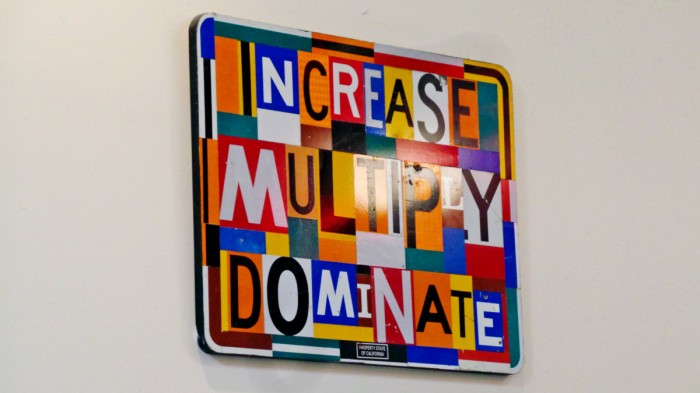 The Restaurant and the most Jewish sign in the world

Amy and I showed up with growling stomachs and decided to over-indulge by splitting two of their gigantic sandwiches between us. I really wasn’t joking about that honest-to-god fear of losing pastrami in my life so I knew that had to be one of our selections.

Our Hot Pastrami Sandwich was served as requested — with no adornment or toppings — layered onto sliced rye bread along with a side of macaroni salad and a sour kosher pickle. This sandwich platter really hit the spot. The tender, fatty meat had a nicely spiced crust on its edges and every bite oozed with salty, meaty goodness.

I applied a generous squeeze of brown deli mustard to the top slice of rye bread and plowed my way through my half of the thick sliced-meat sandwich in no time flat. It was finger-licking good and paired perfectly with the accompanying large, snappy, sour pickle. I thought the macaroni salad was a little runny though, but if that’s your sort of thing then you’ll probably love it. 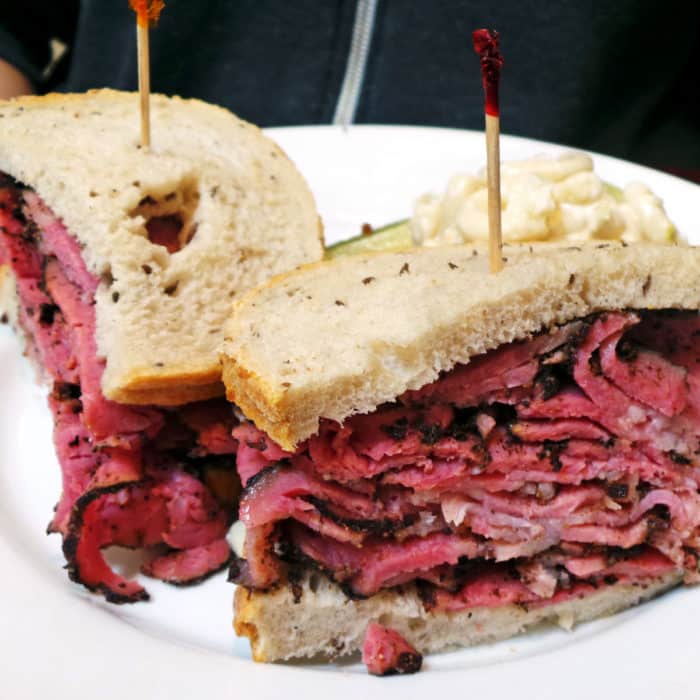 For our second shared sandwich, we selected The Luna from the Toasted Hoagie section of the menu. Unbeknownst to us, this sandwich which was filled with barbecued beef brisket, melted cheddar cheese, coleslaw, and Russian dressing was even more enormous than the pastrami. I’m not complaining – I’m just saying that the sheer magnitude of this sandwich was impressive in its own right.

The meat in this sandwich was also quite good, though not quite as tender and luscious as the pastrami was and definitely shouldn’t be compared to Texas barbecue style beef brisket because that’s not what it’s meant to be. This sandwich instead relied more on the textures and flavors of its toppings like cheddar cheese, crunchy cole slaw, BBQ sauce, and Russian dressing to make it crave-worthy. And it was a super-messy sandwich to eat, but that’s sort of a given when your eating ginormous deli sandwiches like these.

Like the pastrami sandwich, this one also came with one of those outstanding sour pickles but instead of pairing it with macaroni salad, we instead had potato salad with this one. The potato salad almost deserves it’s own write-up because it was so ridiculously good. As much as I loved the sandwiches, I would absolutely return just to have more of this potato salad. There was a really bold mustard spiciness that resonated with every hearty, creamy bite that I just couldn’t get enough of. 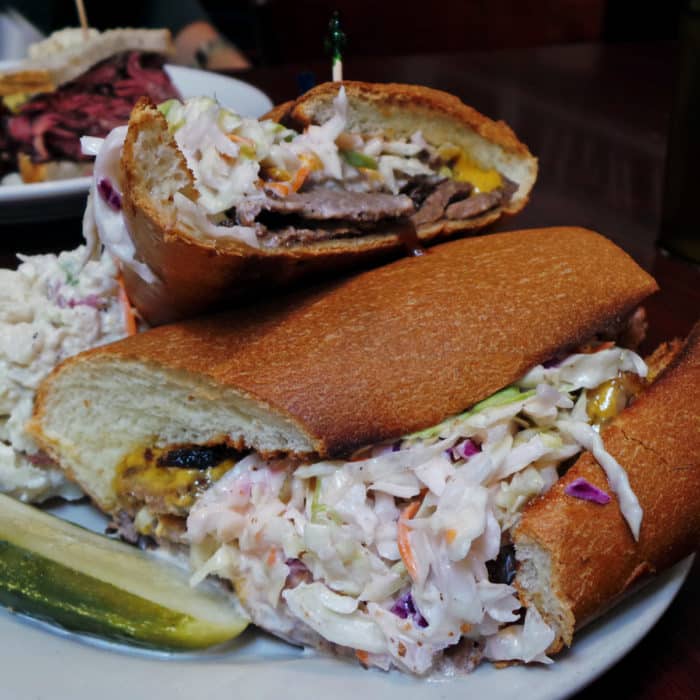 So now I know exactly what I’m gonna order the next time I head to Miller’s — a hot pastrami sandwich with potato salad and a pickle. And all that can be had for under $10. Yes, I feel pretty fortunate to have this slice of New York so close to my new SF home. Now all I have to do is find a decent bagel in this town!

Got another food spot in SF to make this New York Jew feel at home? Let me know in the comments below.

Get *All The Likes* With SF’s Most Instagramable Pastries