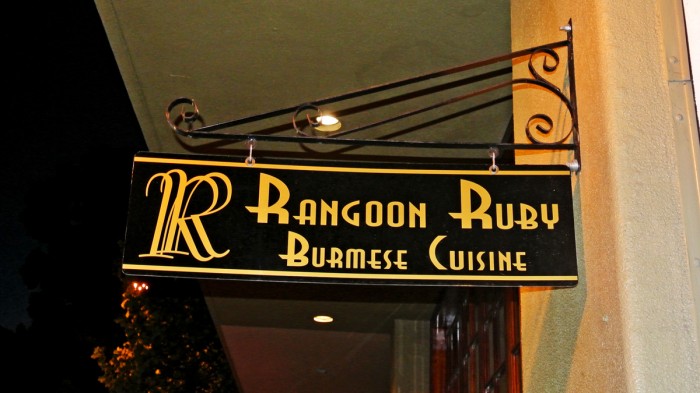 A mere three days after my first Burmese food experience in San Francisco, I found myself in Palo Alto face-to-face somehow with another Burmese restaurant. Odd, I thought, considering I had never come across Burmese food anywhere else in the US before. But a quick bit of research informed me that the original chef from the famed Burma Superstar I had recently visited had defected a few years back to open his own Burmese restaurant in the heart of Palo Alto called Rangoon Ruby. I wasn’t gonna ask any more questions because I had already become quite obsessed with the healthy-ish, but still super-flavorful Burmese specialties and was excited for more opportunities to explore the cuisine while I was staying in town.

This restaurant, like its predecessor, is perpetually packed. On my first visit, I was lucky enough to immediately snag two seats at the bar-top. Actually, I kind of preferred my bar seats. When you’ve got a bartender hanging out right in front of you, you tend to get more personalized service. And our waiter was phenomenal. Very friendly, attentive, and extremely helpful.

This restaurant is a lot more upscale feeling than the Inner Richmond original, but the prices are also a touch higher to reflect the improved atmosphere. It definitely has more of a date night vibe than Burma Superstar and was further upgraded by the extensive tropical cocktail menu offered.

On my first visit, after a quick once-over of the tropical drink menu and a consult with the bartender, I chose a whiskey-based punch drink called a Ruby Sour. Though the drink was definitely on the sweet side for me, I definitely enjoyed it in this environment. 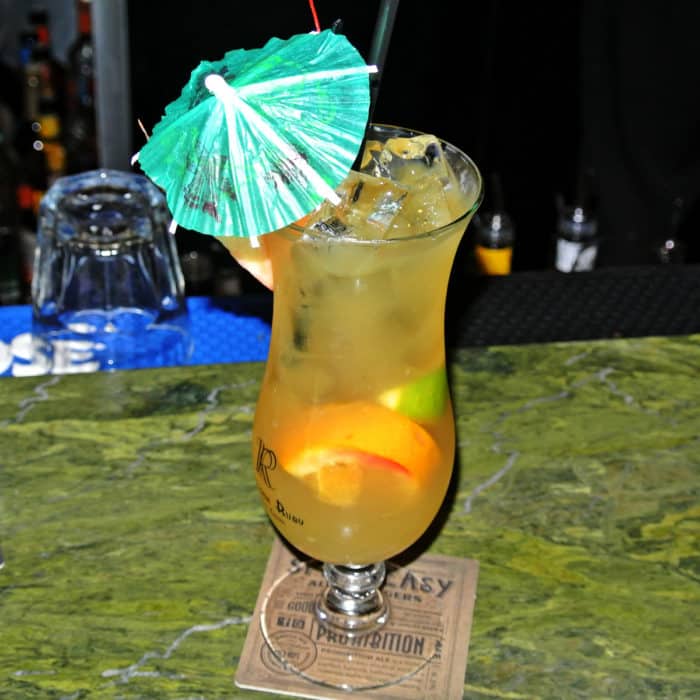 But on another visit, we we’re feeling a little more adventurous with our drink selections and felt like it was the right time to get a little crazy. We ordered one of their super-sized tropical Scorpion Bowls for two which graciously included a written warning about its sheer potency.

We both kinda scoffed at the warning and happily sucked down that sweet, but well-balanced boozy concoction. Upon completing the beverage we considered ordering another round of drinks but found ourselves caught off guard by how strong the drink actually was and decided against it after realizing that both of us were sauced off the single bowl. 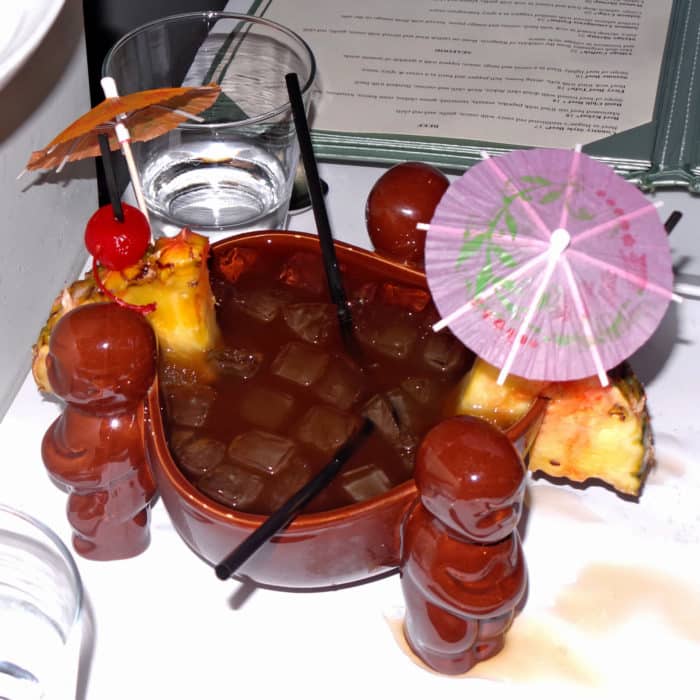 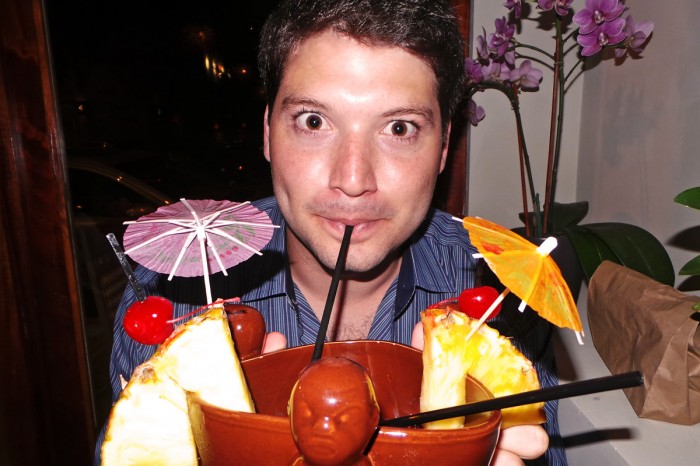 If you want to experience a shared tropical bowl, but don’t want something quite as strong as the Scorpion Bowl, instead get the Lava Bowl. It’s equally as delicious but hardly as potent, so it’s much less likely to throw you on your ass upon completion. 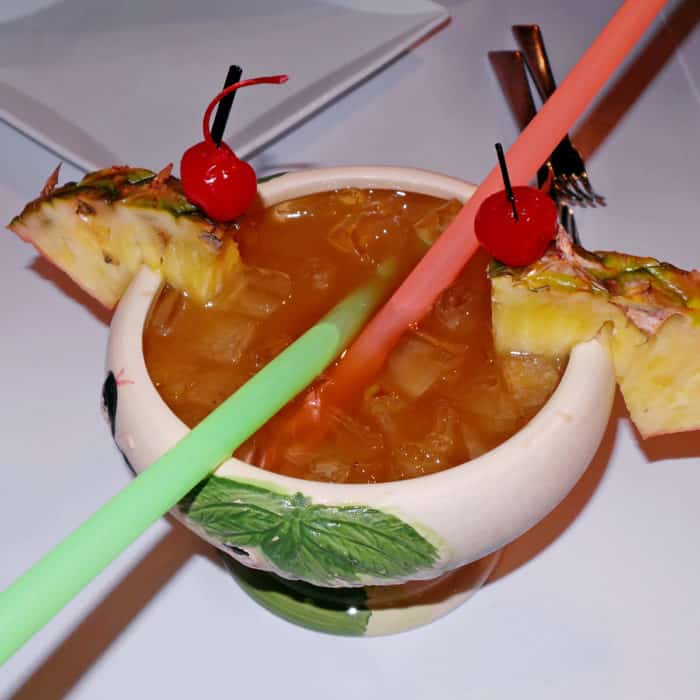 And the drinks are really good and all, but it’s really all about the food at Rangoon Ruby. I loved the exotic Tea Leaf Salad I had at Burma Superstar and felt like I needed to try the version at Rangoon Ruby for comparison. As it turns out, this one blew the original out of the water. It was way more flavorful, exciting, complex and interesting to eat than the first one I had tried and already loved.

Now, I know the unmixed Burmese tea leaves in the center of the platter looks pretty unappetizing. In fact, I’ll admit they look kind of like a big, wet turd, but hear me out on this one. You’re gonna have to get past the appearance because it’s so damn delicious and once it’s mixed up it won’t look so disturbing.

As you probably have noticed, it’s not often I get excited about salad, but this dish has become a mandatory order on every one of my many subsequent visits to the restaurant. It’s loaded with fried garlic, beans, peanuts, sesame seeds, lettuce, tomato, dried shrimp, and fermented tea leaves and the complex combination of flavors and textures really gets me all hot and bothered. If you’ve never had it, it’s a must. 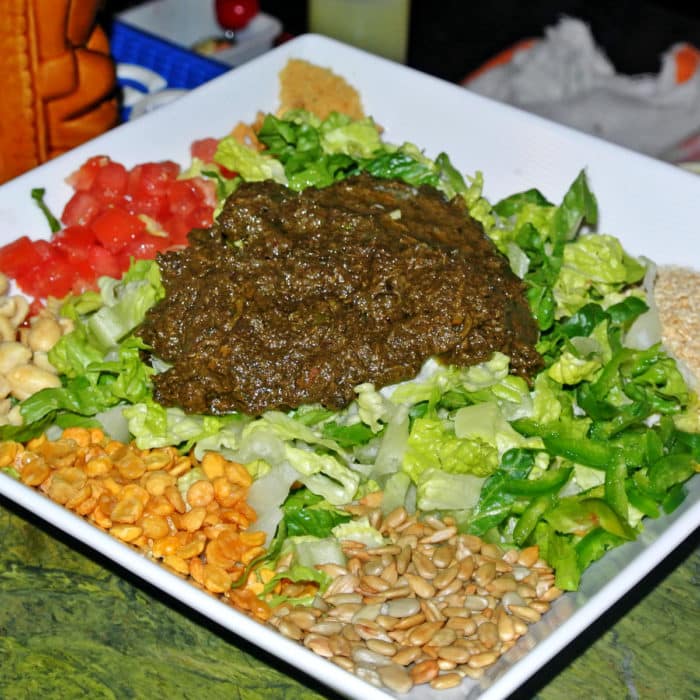 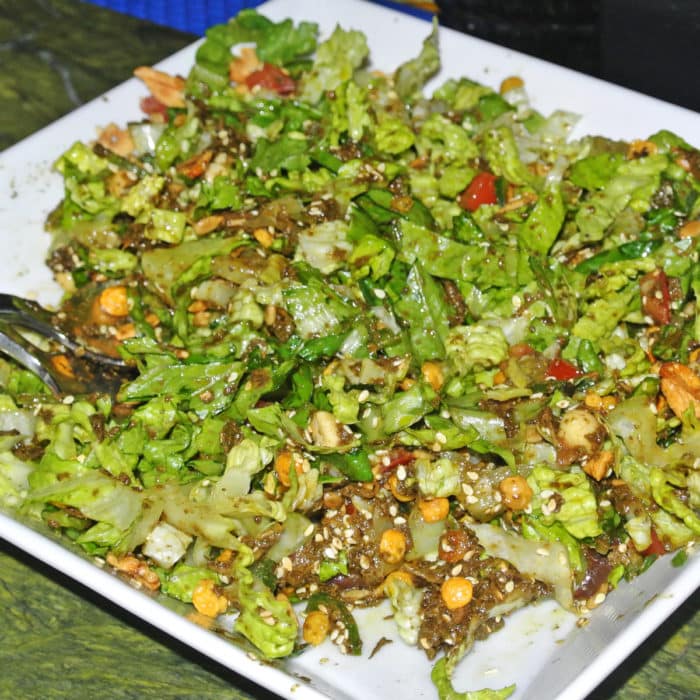 Actually, there’s another salad that also gets me all jazzed up — a famous Burmese dish called the Ruby Rainbow Salad. The wait staff is always so proud of this vegetarian masterpiece that they insist on giving a verbal run-down of every one of the 22 different ingredients that’s earned it the “rainbow” name.

The salad’s‎ made with four different types of noodles, fried tofu, thinly sliced onions, cucumbers, fried garlic, cabbage, cilantro, seaweed, and spicy rice. It’s just as exciting as the tea leaf salad and I could easily argue that it’s actually even better than the latter. It has a nice peanuty noodle flavor that combines well with all of the many other vibrant flavors in the dish. It was also pretty darn spicy, so beware of that. This dish was definitely another salad that I will continue to salivate over and dream about for weeks to come. 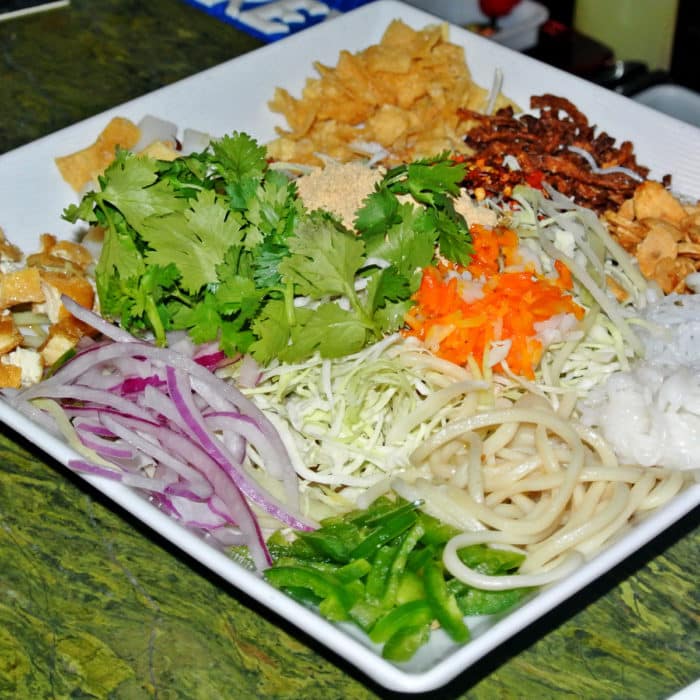 Before we move on to entrees, I’ve got to tell you about one must-have from the appetizer section of the menu. With your meal, you absolutely must get the Palata with Chicken. Palata is flatbread similar to the roti served in the common Malaysian dish, Roti Canai that I love so much, but this is so much better.

This bread was flaky, dense, crispy, and chewy all at the same time. Holy. Crap. That flatbread was so good and was even made better by dunking it in the distinctly Burmese curry dipping sauce. That curry started with a mostly peanut satay-like flavor then followed up with a strong, unusual twist that I think was pickled mango. All in all, this dish was killer. 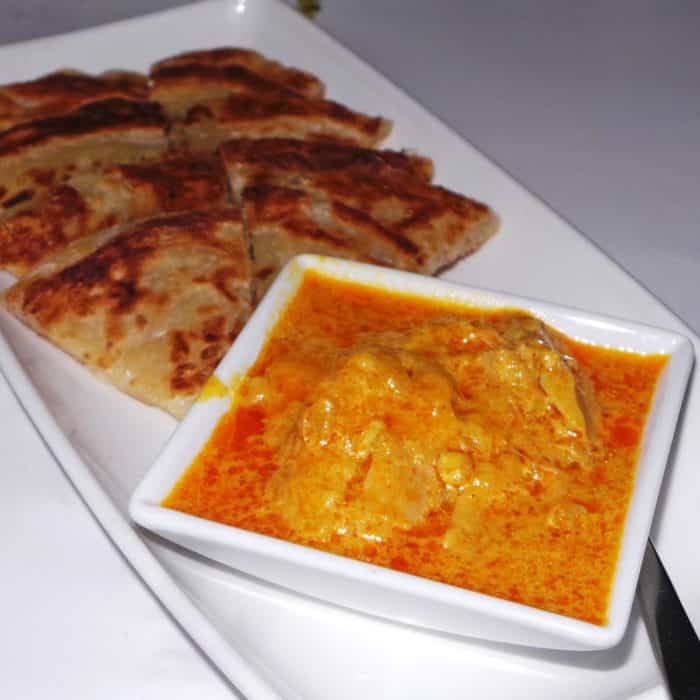 Now we can move onto entrees. I pretty much always blindly follow my waiters’ suggestions because everything is so good and they know what’s best.

First up was the Garlic Shrimp and Eggplant which probably was more Chinese in origin than Burmese, but it was still really good. It had that classic garlic eggplant flavor you’re probably familiar with from solid Chinese takeout joints but also had plenty of large, snappy, stir-fried shrimp throughout. This dish was perhaps not as exciting as the Burmese salads or Palata, but was still really excellent and worth having if that’s what you’re in the mood for. 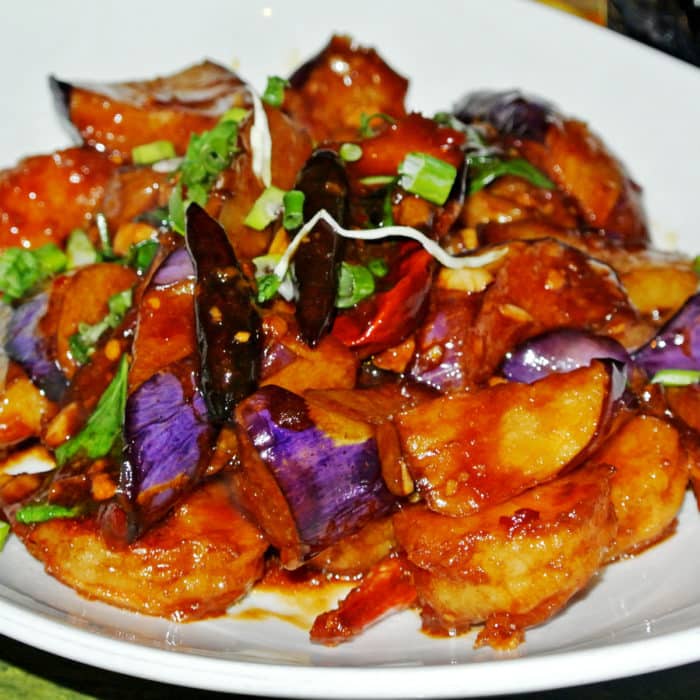 Next, another waiter recommendation, the Fiery Beef Tofu. We actually only ordered it “medium-spicy” in an attempt to not destroy our insides, so it was pretty reasonable to devour without enduring any gastrointestinal pain despite the “fiery” name.

The beef was coated in a sticky brown sauce and was stir-fried with string beans, bell pepper slices, and chewy firm tofu strips. I know many of you probably resist the idea of eating tofu, but in this preparation it was excellent and really highlighted the toothsome ingredient nicely. The beef was extraordinarily tender and great, but it was definitely the tofu that made this dish a real winner. 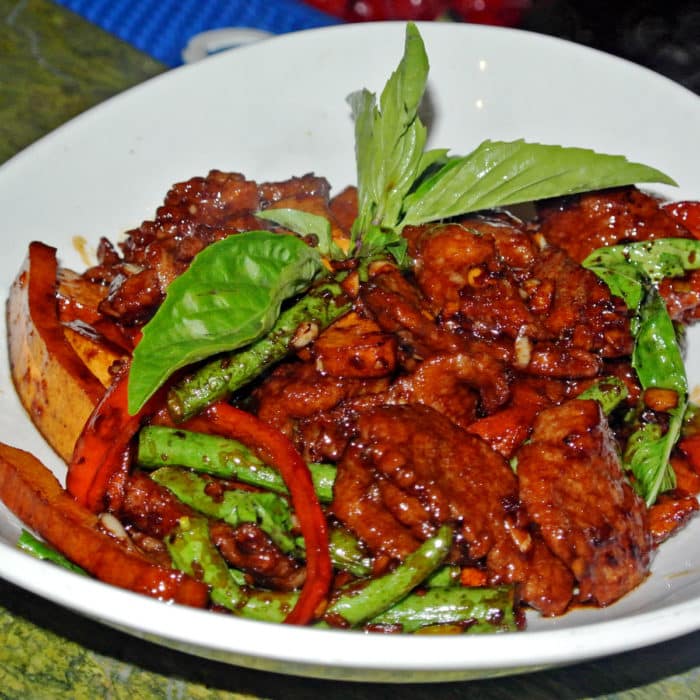 The Burmese Pork Curry was another dish that came strongly recommended. It may be hard to tell from the photo, but the portion was absolutely enormous and that gigantic bowl was loaded with huge hunks of tender pork meat. This dish was also a lot tamer and less fiery than it looked, but it was still quite delicious. This was particularly enjoyable when spooned over a bed of their fantastic coconut rice. 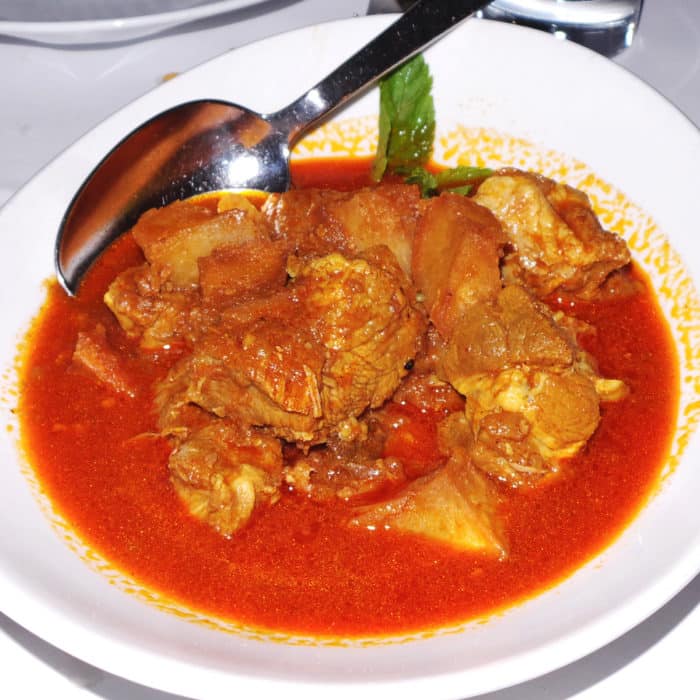 For another great beef-based entree option, I’d recommend the Basil Chili Beef which was another nicely executed stir-fry. It was very interesting and complex, but it was the spice and herb blend on the beef that made me fall in love with the dish. Man, they always do such a nice job getting that beef so extraordinarily tender!

Wanna a chicken entrée? Go for the Minted Jalapeño Chicken. What you’ll get is a heaping pile of rough chopped chicken bits tossed and stir-fried with a garlicky brown sauce and plenty of mint leaves and sliced jalapeño. It was really interesting and delicious and I think intended to be eaten over a bed of rice, but I couldn’t help thinking that this would be even better as a handheld lettuce wrap bite. 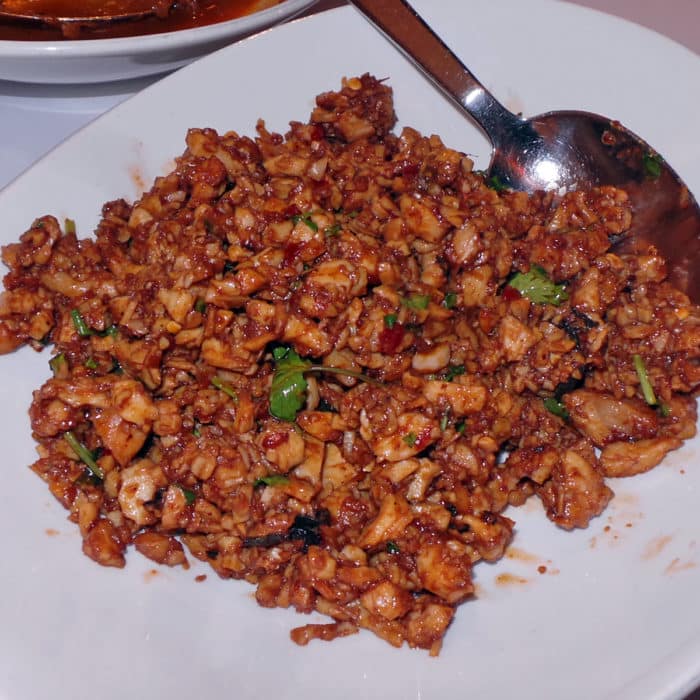 One final recommendation, don’t overlook the simply named Shrimp Curry. Honestly, it was one of the best shrimp dishes I’ve ever had in my life. The portion of perfectly cooked shrimp was very generous and that red curry was ridiculous and dreamy. You better believe I licked the bowl clean. It was just so vibrant, spicy, flavorful, and unusual. Get this for sure. 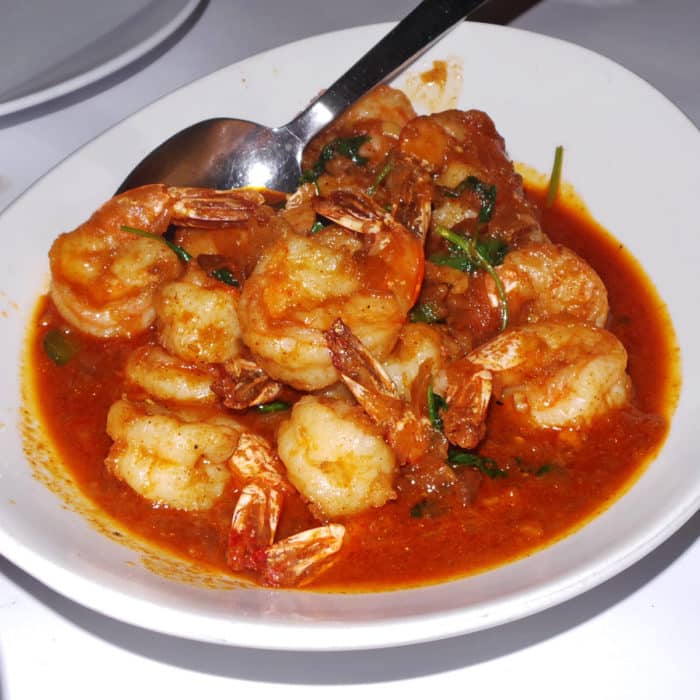 So now that I’ve gotten my fill of Burmese food by dining at Burma Superstar once and Rangoon Ruby at least five times, I feel like I’ve got a handle on what kind of flavors and textures to expect with the cuisine.

Though Burma Superstar is the original and still constantly draws massive lines, I think that the food at Rangoon Ruby might actually be more flavorful and flat-out better. The atmosphere is a little more upscale and the prices a touch higher accordingly, but for that incredible vegetarian-friendly food, I’m more than happy to pay the price.

Got another unique ethnic cuisine I should try in the Bay Area? Let me know in the comments below.