I love new restaurant openings. There’s always this energy in the air, an excitement, the mystery of what the gut gamble might uncover. That’s why I was so excited to be invited to the soft launch of Union Bar & Kitchen in West SoHo.

What the hell is West SoHo? Well, it’s also known as Hudson Square and is bounded on top by Houston, below by Canal, and covers everything West of 6th Ave. It’s a strange area of the city that has had some difficulties becoming a dining destination neighborhood, though I do promise there are and have always been some great spots.

Union Bar & Kitchen, more colloquially referred to as UBK, is a really great restaurant, and in my opinion, exactly what this neighborhood needed – it’s a great fit for post-work drinks, a client lunch, or a date night.

I’ve always been a sucker for lofty ceilings and Edison bulbs, and they’ve got plenty of both here. There’s a white tile and rusted metal motif throughout the space and a number of impressively large canvases featuring the works of painter Clifford Bailey. At UBK, it all came together to create a comfortable but sexy date night atmosphere. 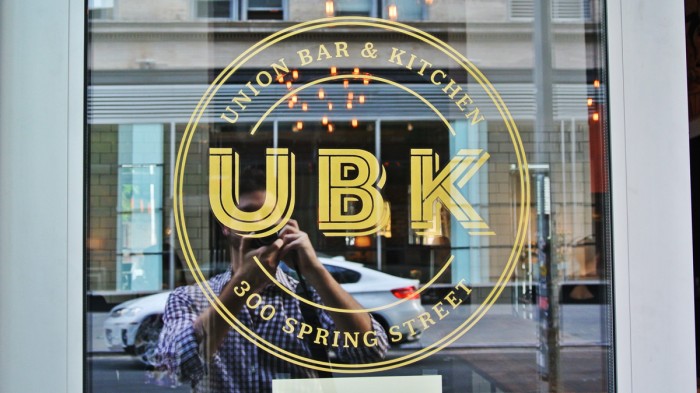 When Amy and I arrived, we decided to start by taking a seat at the bar to enjoy a round of cocktails before dinner. I went with the first cocktail that caught my eye, the Trouble Maker which also came highly recommended by our bartender.

The drink featured smokey mezcal, and included ancho chile liqueur, fresh lime juice, agave nectar, and absinthe. I was obsessed. Amy challenged the bartender with an off-menu request. Both drinks were smashing successes and I was particularly impressed by the interestingly complex, yet incredibly well balanced Mezcal drink I had ordered. 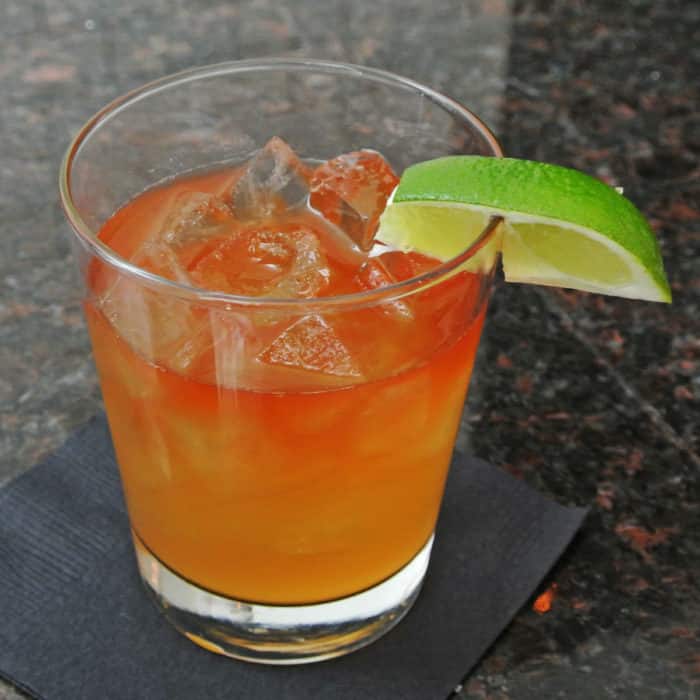 Next, we were seated at a two-top table in the middle of the restaurant. First things first, another round of cocktails. This time I opted for the Rough and Tumble made with bourbon, Fernet Branca, creme de cacao, and Chartreuse whipped cream. This was a little different than the usual kind of cocktail I’m attracted too, but I really liked the foamy texture and menthol flavor imparted by the Fernet Branca. 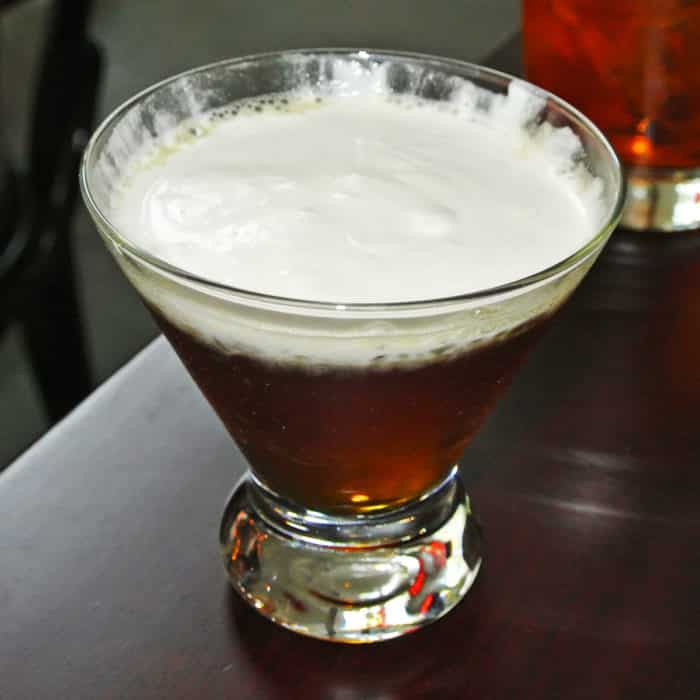 Amy went with a Vieux Carre, a classic boozy cocktail I learned to love on our first trip to New Orleans together at the bar where it was invented. It was made with cognac, rye, Antica Carpano, sweet vermouth, angostura bitters, Peychaud’s bitters, and a Benedictine rinse. UBK’s version was executed to perfection. Another winner. 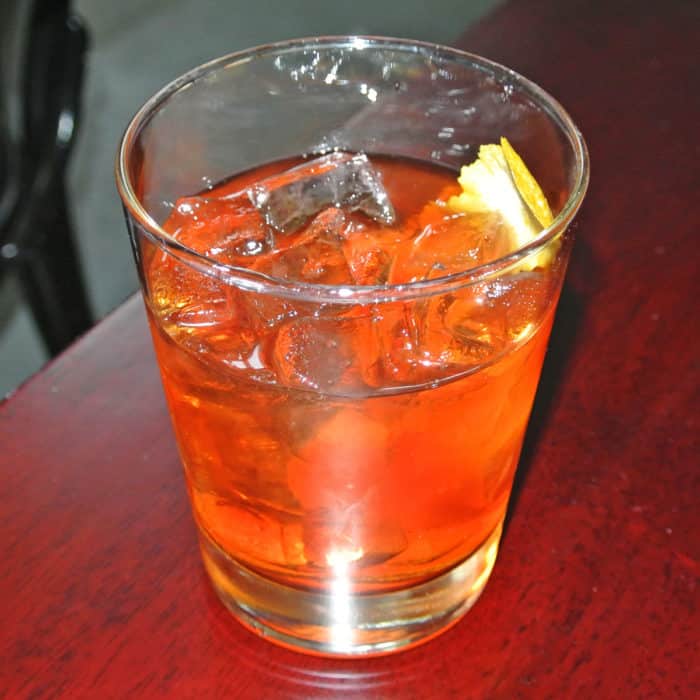 At this point, we placed our order before the gratis table starters began to arrive. First, the chips and guac. I know this guacamole isn’t much to look at, but there was something truly special about it. It had an almost pureed texture that was silky smooth yet mildly chunky at the same time. We went ahead and squeezed the provided lime wedge over top and mixed it all together creating an ultimately flavorful and delicious creamy dip to swipe up with the clearly fresh-fried tortilla triangles.

I couldn’t get enough of this guacamole and was tempted to call my waitress over and ask if I could have some more to-go to eat off of girlfriend’s body later. I restrained. (Yes, I am weird. And yes, that’s something I would totally try to pull.) 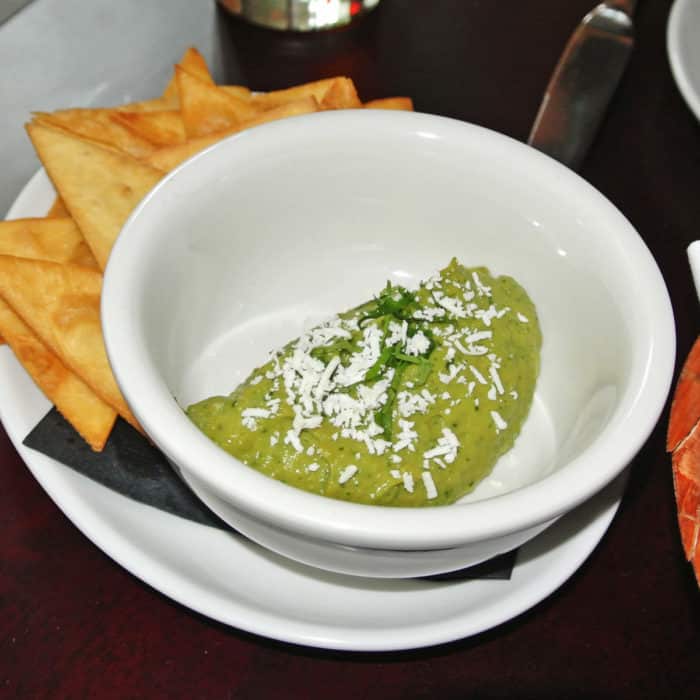 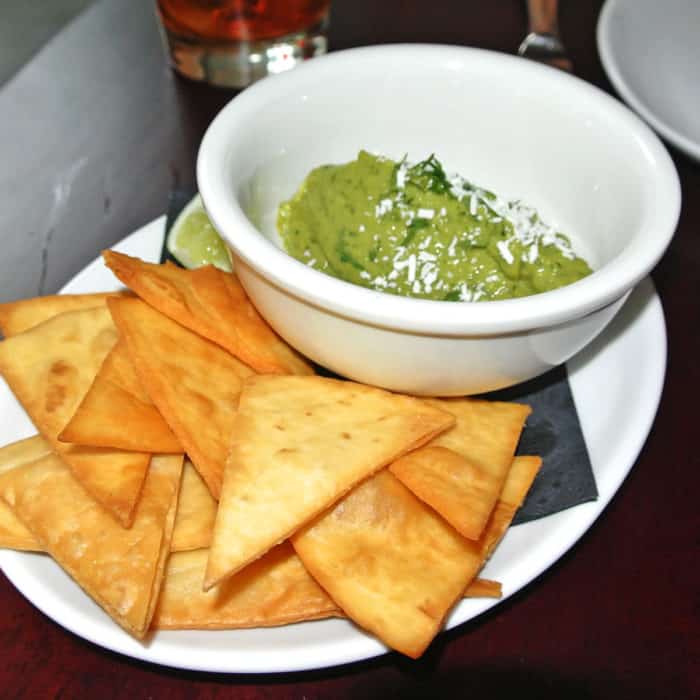 Along with the chips and guac, a basket of Jalapeño Cornbread also automatically arrived at the table. This was about the best corn bread I’ve found in NYC. It was hot out of the oven and the texture was just right. Crumbly, yet moist. And it had just the right level of jalapeño kick coming through. It was great, but it would have been outstanding had they provided some butter to smear on top. 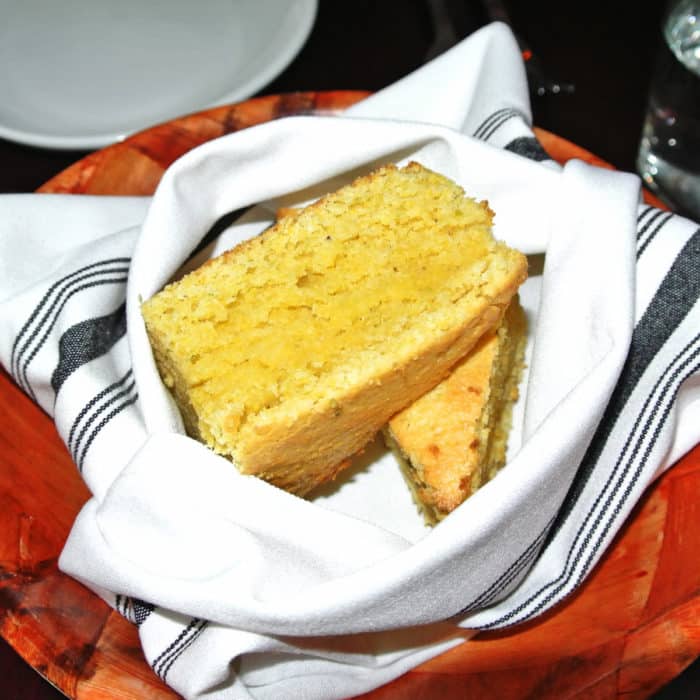 After that, the appetizers we ordered arrived. We began with the Panko Fried Oysters, which were served on the half-shell on a bed of tartar sauce with a topping of chili infused tonkotsu sauce and a sprinkling of chopped chives.

These were pretty darn delicious if you ask me. Fresh out of the fryer, the light breading crunched to reveal the plump, tender, oceany bivalves with a subtle Japanese tonkotsu taste. With the tartar sauce serving as the major flavor component on these breaded and fried crustaceans, I was brought right back to my childhood eating fried clam strips on the Jersey Shore. 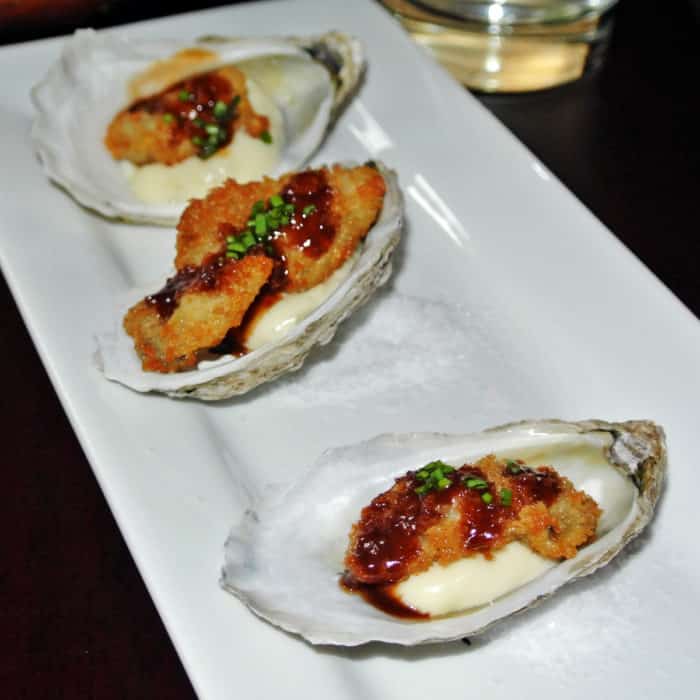 Next, we dove into the Hamachi Tartare, which was served alongside a plateful of the same freshly fried tortilla chips the guac was served with. The raw, rough-chopped yellowtail had a distinctly Asian flavor profile and was tossed in a citrus soy marinade with slivers of spicy red peppers, sesame seeds, and briny capers. The capers, an unusual seafood tartare ingredient, was a nice nod to the standard steak tartare accouterment. Though their inclusion sounded strange, it all came together really well with bold, strong flavor combos and textures. 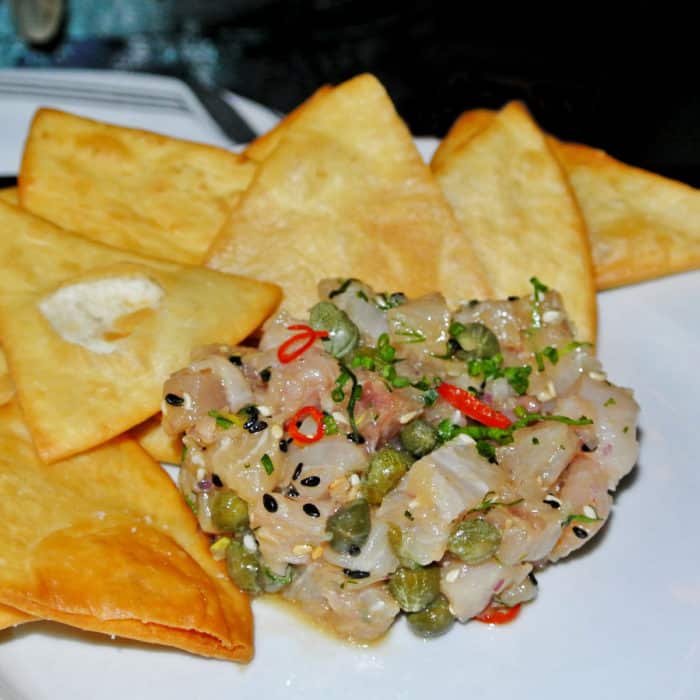 For our main course, we first chose the Fish Tacos from the standard bar menu. These two enormous tacos came loaded with massive, panko-crusted, deep-fried, flaky white fish cutlets which were smothered in a chili avocado slaw and a couple dashes of hot sauce. We both agreed that these were really delicious, flavorful, nicely fried, and filling but definitely needed the squeeze of lime juice on top as well as a pinch of salt and crack of black pepper. After those minor adjustments, these fish tacos were awesome. 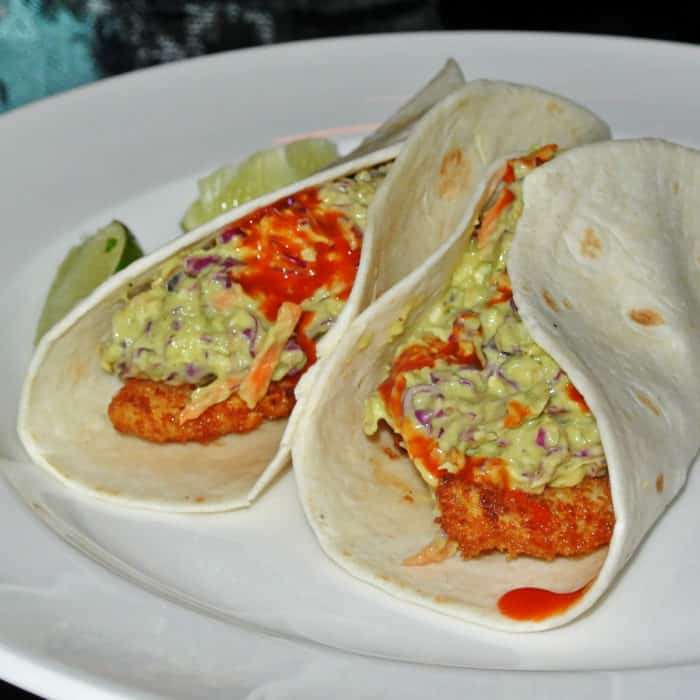 With the fish tacos, we ordered a side of Cauliflower Gratin, which arrived in a bubbling, black cast iron dish. This too needed a touch of salt and pepper, but was quite delicious after the amendment. I also don’t want to call it a gratin because, in my mind, a gratin is usually a solid mass of veggies and cheese, whereas this dish, while definitely covered in cheese and cream, was not a solidified mass. I would probably describe it more as a cheesy baked cauliflower, but yeah, I know I’m quibbling. 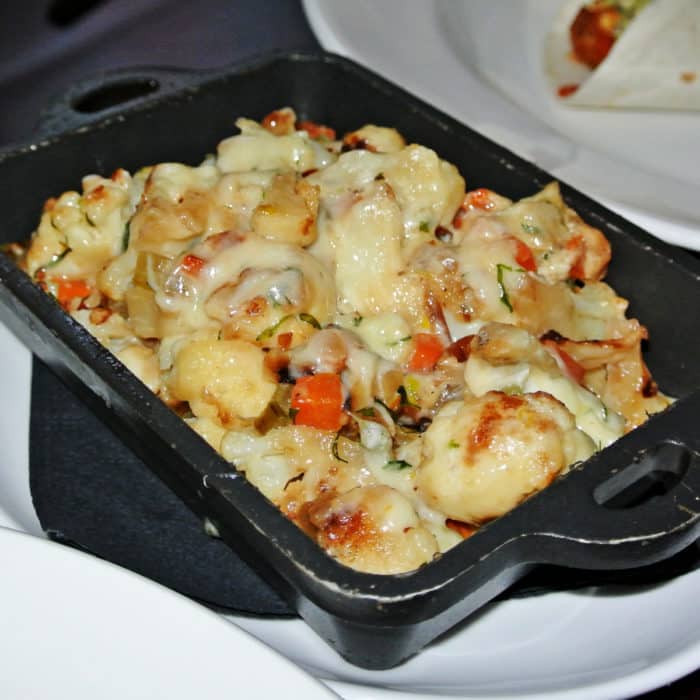 For our other entree and side combo, we got an order of the Marinated Hangar Steak with a side of Rosemary Fries. I don’t know if I tasted any rosemary in those fries, but I’ll be damned if those weren’t some of the best fries I can remember having. They were that super crispy, double-fried kind and had a kickin’ spice blend that coated the exterior of each fry. These were really awesome fries.

The steak was also really excellent. Cooked to a beautiful medium rare as requested, the center of the tender hangar steak glowed a brilliant reddish pink hue, while the external crust had a deep, blackened charred look and taste. I quite liked the flavor that the crust imparted in the meat, though I don’t think all diners necessarily would. All in all, the steak was pretty straight-forward with regards to flavor and preparation, I couldn’t help but wonder what it would be like kicked up with a bit of chimichurri. In any case, I really enjoyed the steak, particularly when eaten in conjunction with those badass frites. 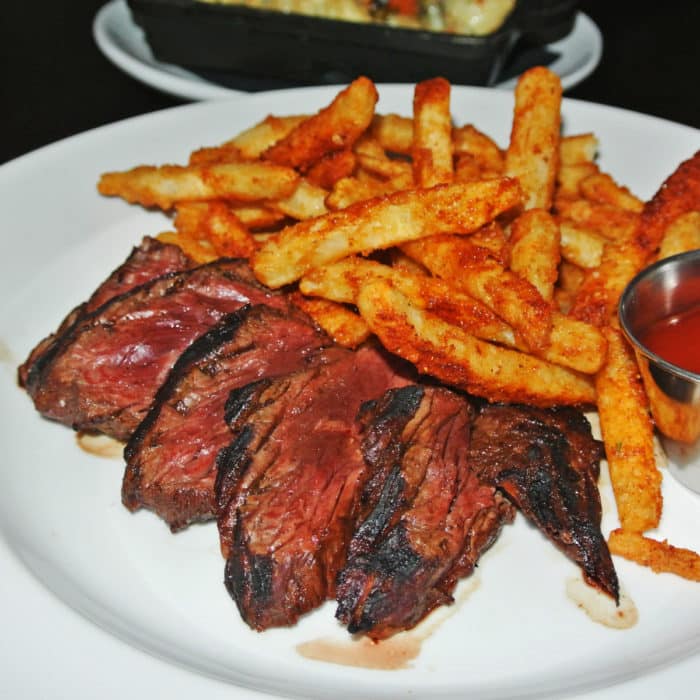 I should mention that I couldn’t resist having one more cocktail during this entree course and selected the Velvet Buck made with Haitian Rhum, fresh lime juice, housemade ginger syrup, and Velvet Falernum. As good as all of my previous cocktails were, drinking this one made me completely forget about the ones I had drunk before. This drink was awesome. This drink was so well-balanced and had such a pleasant ginger-forward flavor profile that highlighted the Haitian Rhum and limey citrus notes perfectly. 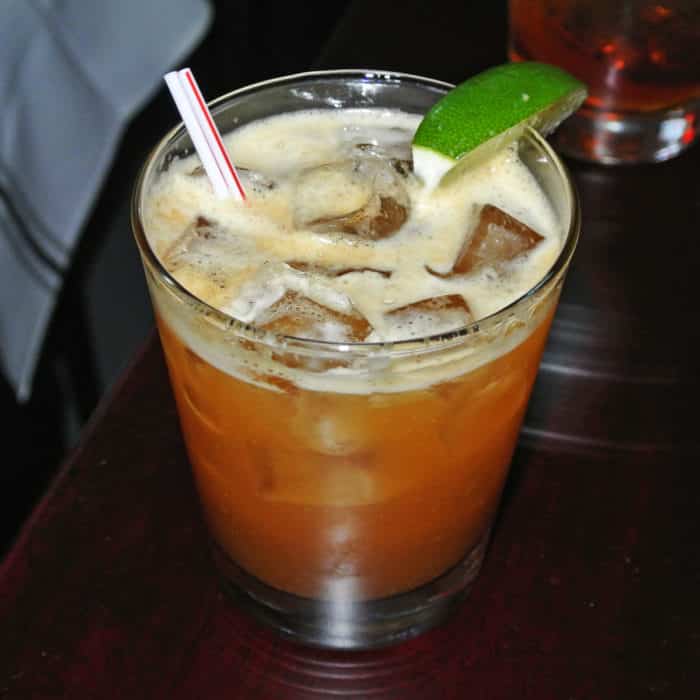 Belts loosened, we arrived at dessert. The first of the two provided was some crazy creation called a Peanut Butter Chimichanga. Yes, this sounds absurd and as you may have guessed, I was psyched to try it. The crispy fried wrapper surrounded a rich, chocolaty, creamy, oozy filling that tasted boldly complex, sweet, and nutty all at once. The hot chimichanga and cold ice cream really struck a chord with me and it’s no surprise this is exactly the kind of dessert I would love. 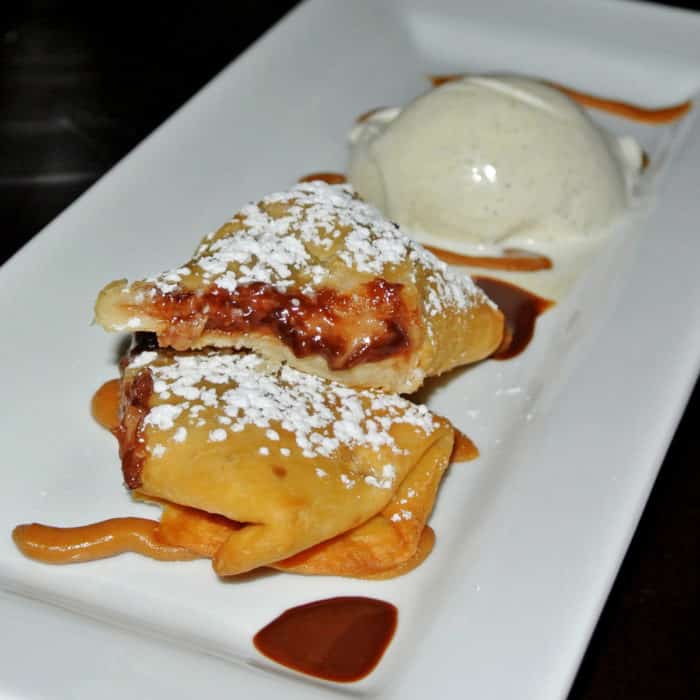 I didn’t think the second of our two desserts could possibly trump the first. But the Ancho Brownie was ready to put a hurtin’ on the Chimichanga. We next dug into the cubes of Ancho Brownie which were remarkably fudgey, but still had a sort of gritty, crunchy element similar to granulated sugar. And the ancho chile definitely made its presence known with its subtle-at-first smokey burn that built up to a wonderfully fiery rumble. Quite the intense bite to conclude this phenomenal meal. 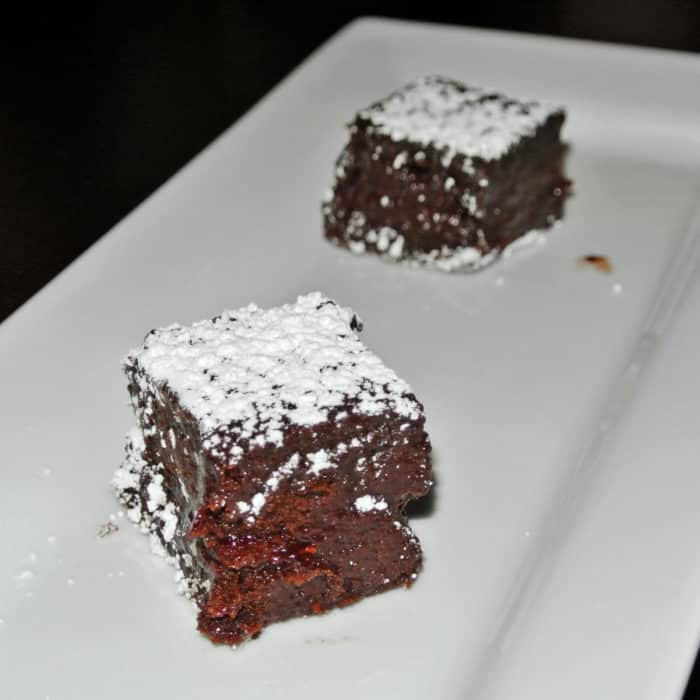 Since I was there dining on soft launch night, it’s hard to say what I’d think of the price vs. value. But, if I had to wager a guess based on the menu I looked at and the way I was feeling after eating those dishes and drinking those cocktails, I think it’s safe to say I’d leave happy and satisfied on a normal night. Service was spot on, no, impeccable – which isn’t easy to pull off on soft launch night. There’s no doubt in my mind that I’ll be back at the very least for some post-work cocktails and bar bites in the near future.

Got another great spot in the West SoHo area I should check out? Let me know in the comments below.

Disclaimer:  I attended the soft launch of UBK free of charge.  All recommendations and opinions are my own.

Get Your Korean Fried Chicken on at Bon Chon in Sunnyvale