So one night, four of us got together and got ourselves seated at a small table in this narrow and blatantly nautical restaurant. If this restaurant existed in New York, I think it would probably feel like an ironic, hipster schtick, but here it somehow just made sense. And unlike in New York, where a popular restaurant would be overstuffed beyond comfortable capacity on a Friday night, this restaurant was completely full, but not overcrowded. 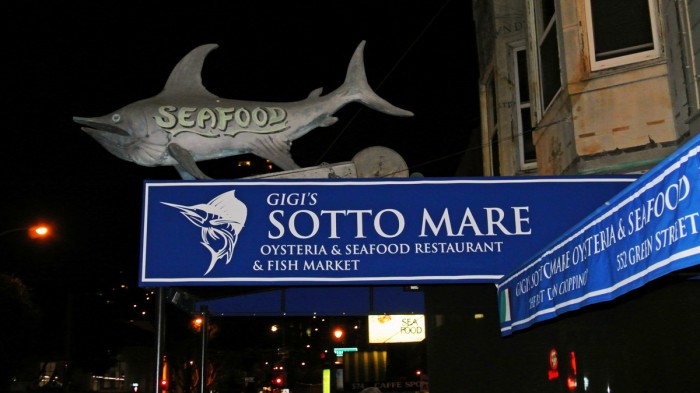 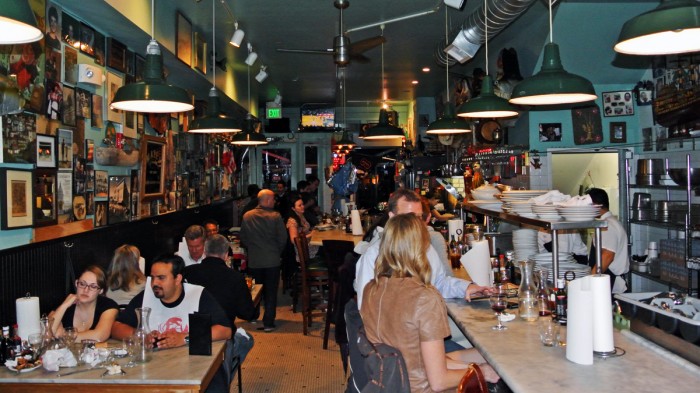 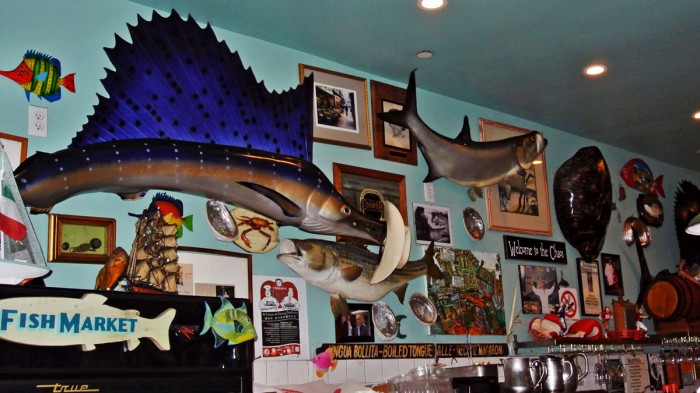 Sotto Mare serves both a house red and white wine by the half-carafe which seemed like a perfectly logical way for us all four of us to get our vino fix. Both wines were standard, unremarkable house wines that were completely fine and ordinary. They did the trick and nothing more. 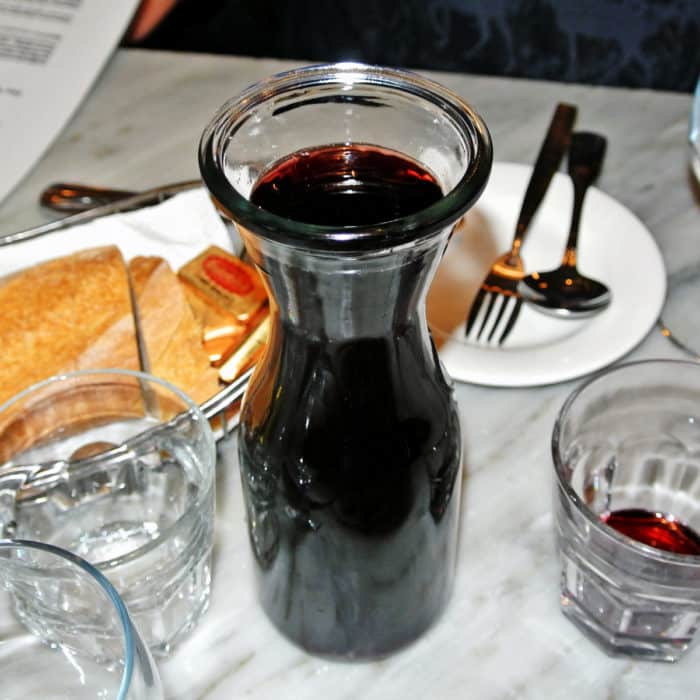 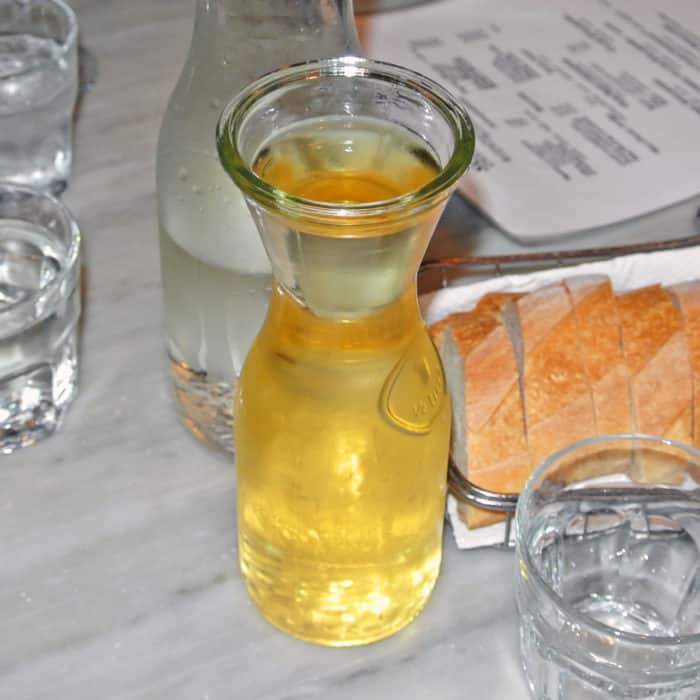 Half Carafes of House Wine

Really though, we were here to chow down on some awesome seafood. To begin the meal, we started with bowls of “Our Best Chowder”. The name is theirs, not my own, though I can’t disagree about it being a really awesome chowder.

It was creamy, but not overly thick and had a mild, peppery flavor that allowed the generous portion of large, tender clam bits to be highlighted. I really loved that every spoonful came loaded with a ton of clams, I just didn’t appreciate having to eat around the many inedible bay leaves that had been left floating throughout. 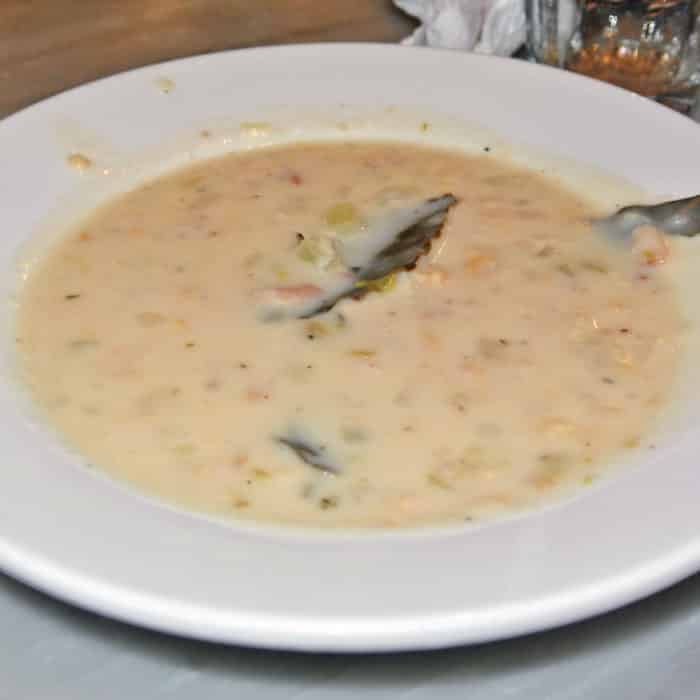 After finishing the last scoop of chowder, the main courses began to arrive. First we had the Cioppino known here as the “Best Damn Crab Cioppino”. I quickly learned that this dish was a gigantic bowl contained a San Franciscan fisherman’s seafood stew. Sotto Mare’s cioppino is claimed my many to be the best rendition in all of San Francisco, so I was extremely excited to give it a shot.

When analyzing this dish you could easily oversimplify and say that it’s just a variety of seafood and pasta served with a tomato sauce, but that really would not do this incredibly delicious stew justice. All of the seafood was cooked perfectly to absolutely ideal tenderness. The tomato sauce took on a subtle seafoody flavor profile without tasting too fishy. And all of the seafood – mussels, clams, bay scallops, and prawns – was great, but I think the tender Dungeness crab meat stole the show. It definitely took a bit of work to free the flaky, buttery, white meat from the pre-cracked shells, but it was totally worth the extra effort to enjoy such amazing seafood bites. 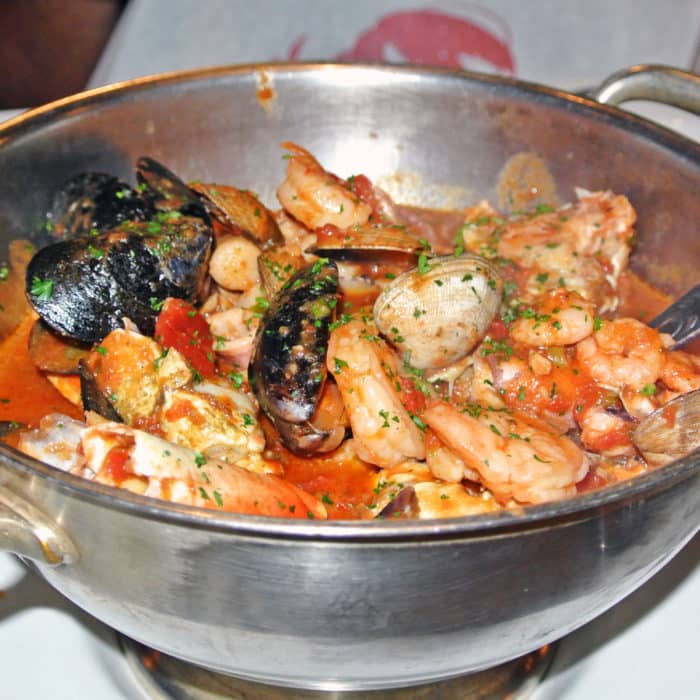 Also, eating cioppino can be a messy ordeal, so every eater is given with their own paper bib, which I happily sported with a shit-eating grin strewn across my face throughout the meal. Man… I looked like a real asshole. 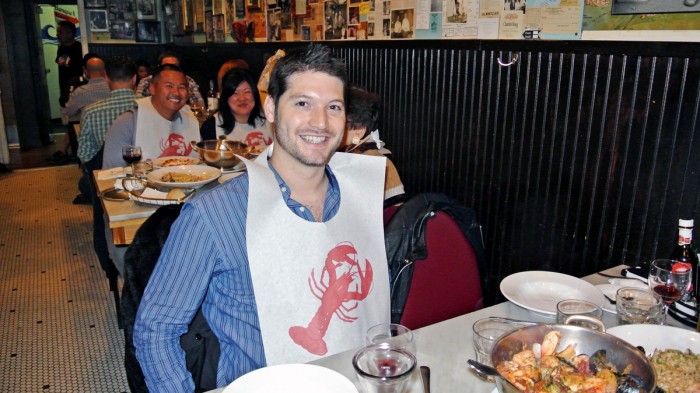 In addition to the cioppino entree, we also got an order of Risotto with Seafood for the table to share. This heaping pile of tender, cream-loaded rice was studded with a generous amount of various sea creatures including clams, mussels, bay scallops, octopus, and more. Once again, all of the seafood was cooked perfectly which allowed every awesomely creamy, shellfish-loaded bite to be enjoyed completely.

So if you’re in San Francisco and are looking for expertly prepared seafood, head to Sotto Mare in North Beach. I don’t think I have nearly enough experience with cioppino to confirm or deny their claim of serving the “Best Damn Crab Cioppino” in San Francisco, but I certainly enjoyed the hell out of it.

Got another seafood spot in San Francisco I should check out? Let me know in the comments below.