After departing from Marathon and completing a massive seven hour leg on our whirlwind roadtrip across Texas, we finally arrived in San Antonio and headed straight to the Alamo. 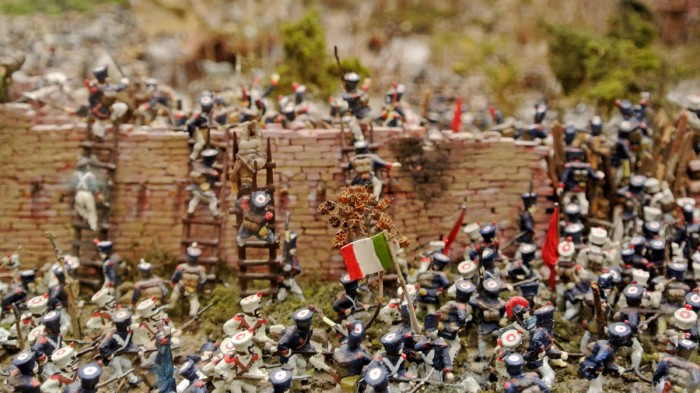 It might have looked smaller than I expected from the outside but it was actually quite impressive on the inside and has amazing history to go along with it. The only question I still have is, where’s the basement?

As soon as we finished at the Alamo, we drove over to Hotel Havana where we would be staying for the night. Everything about it felt like a little slice of Cuba right in the middle of downtown San Antonio. It’s very beautiful and unusual and happens to be owned by the same people as El Cosmico, where we stayed inMarfa. 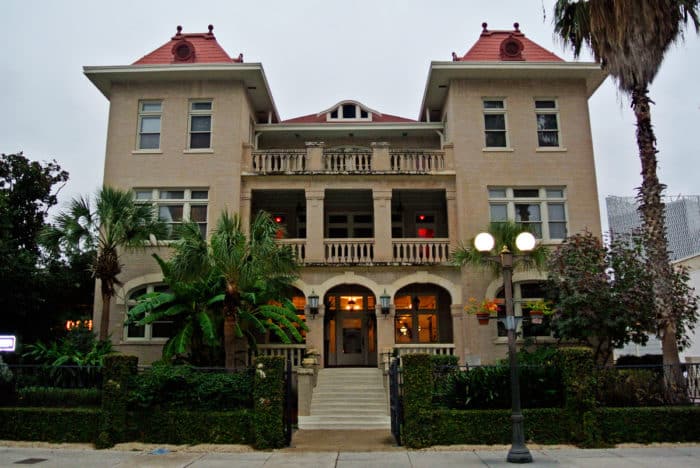 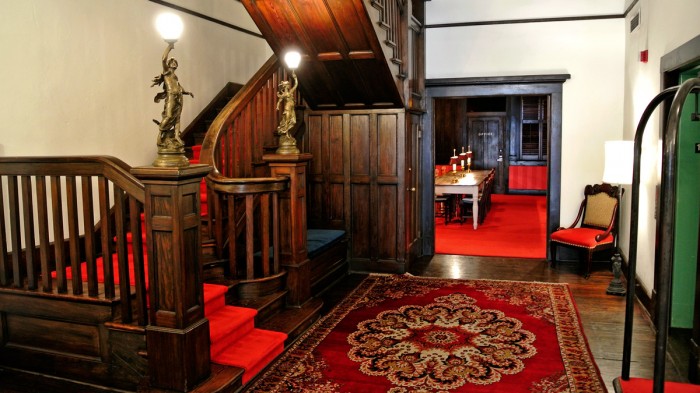 After checking in, we headed to our room, lucky number 13. I’m not sure what happened to my camera during this photo, but somehow it seems appropriate. 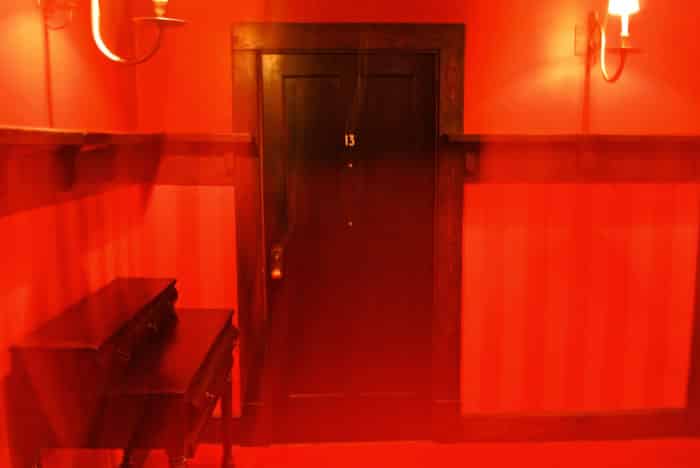 The accommodations were very comfortable and closely matched my visions of Cuba. We got ourselves cleaned up and ready for the night and prepared to head up to the northern stretches of the famed San Antonio Riverwalk for dinner at NAO Restaurant. 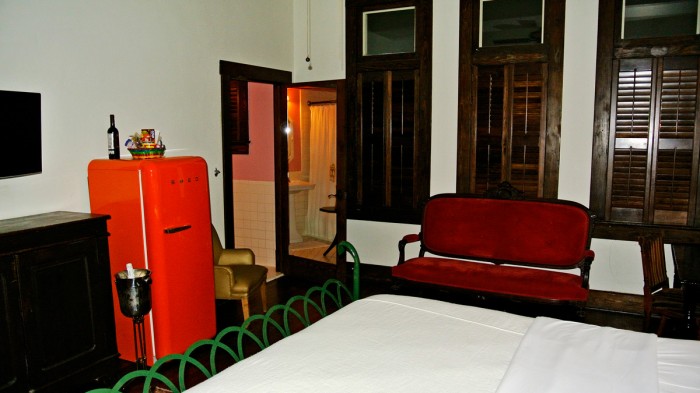 At first we were going to attempt the 20 or 30 minute winding trek up the Riverwalk, but quickly came across a river boat and learned that it could be hired as a water taxi for a very reasonable price. We took the opportunity to sit back and relax and take in all of the Riverwalk sights. There are a number of art installations lining the waterway, but I think the coolest part of the ride is how the boat must utilize a system of “locks” just like the Panama Canal to lift the boat to the elevated portion of the waterway. It’s pretty incredible to feel the boat lifted twenty feet by the massive displacement of water.

After completing our journey up the waterway, we arrive at north edge and are let off about a block from NAO. I first heard about the restaurant through my usual research method of trolling the Chow.com boards. I found a great thread listing users’ favorite places in San Antonio cooking up modern, forward-thinking food which sounded like a perfect way to conclude our week long adventure. NAO is the Culinary Institute’s high end restaurant and came highly recommended. Both the front of the house and the kitchen are entirely run by culinary students which allows the menu to remain very reasonably priced for such high caliber food. 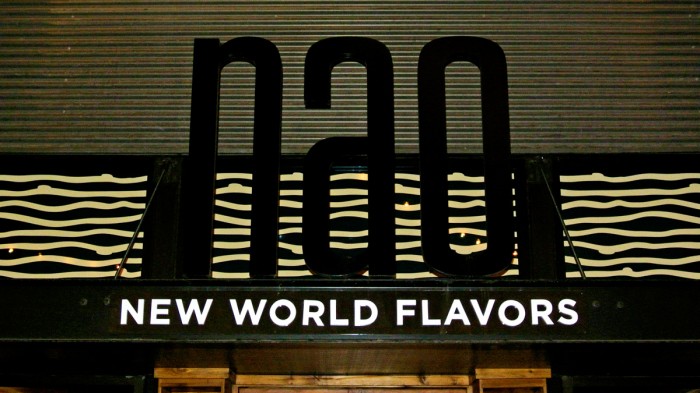 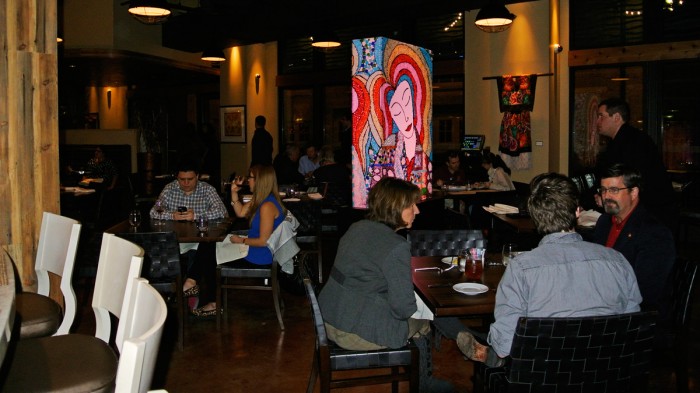 Once inside we requested to be seated at the chef’s counter so that we could watch the excitement as the chefs hustled around preparing everybody’s food. Our waiter came over and was extremely friendly and helpful. He was kind enough to cut the BS and give it to us straight so that we could successfully select the best items on the menu.

We began with cocktails. After looking over the options and consulting with the waiter, I ordered a drink called the Mas Chingoni that fulfilled my request for a smokey, spirit-forward concoction. It’s made with añejo tequila, carpano antica, aperol, and mezcal making it quite smokey drink with just enough bitterness to balance out.

At this point, the table bread also arrived featuring Brazilian cheese rolls, known as pao de queijo, which I quite enjoy along with a form of tortilla chip flatbread. 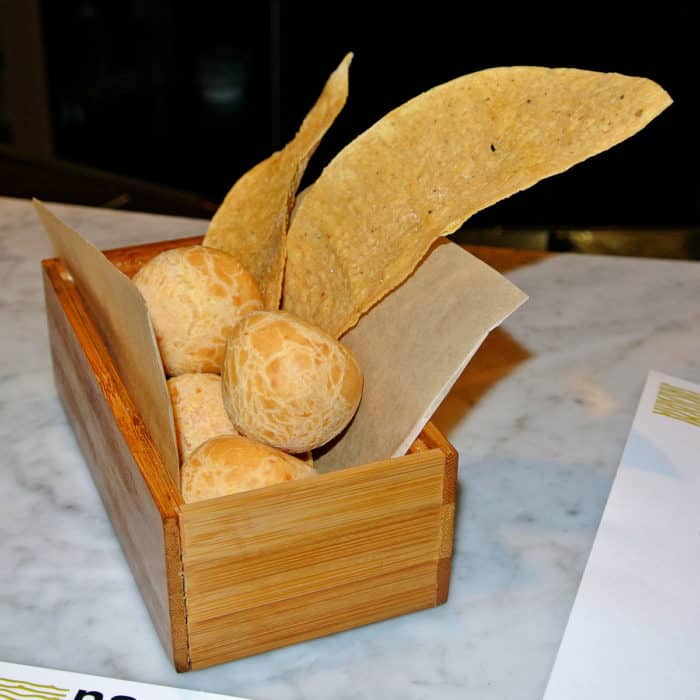 Soon after, our first dish, Mexican Meatballs known as Albondigas arrive. They were delicious and quite enjoyable though I will warn were quite spicy, verging on too spicy for us. 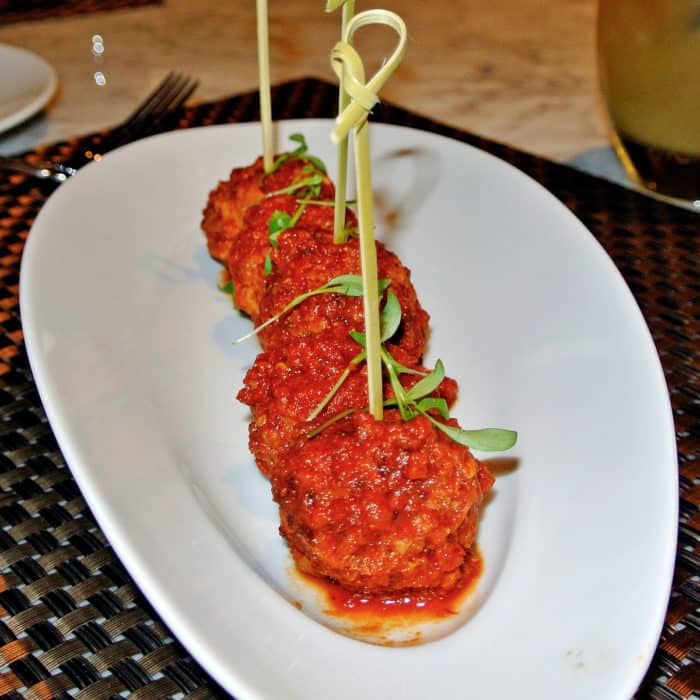 Next up was their version of shishito peppers. At home, I regularly buy fresh shishito peppers and prepare a similar dish, so I’m pretty particular about how these should be cooked. I like their soy, lime, and salt flavor profile but I think they could cook the peppers a little less so that they retain some of their snappiness. There’s no denying that they’re very delicious this way too though. 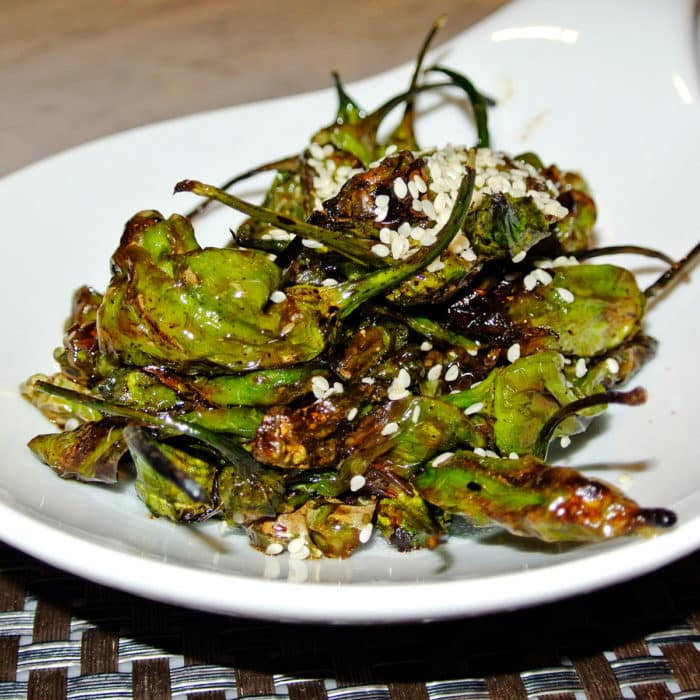 Next up was their Tuna Tiradito. This is their version of seared tuna prepared in a Peruvian style with a tamarind-kion dressing, roasted corn powder, and peanuts. It was a very tasty dish, but I wish the tuna was served closer to room temperature. The flavors were very nice, but we found it odd that the tuna was served so cold. 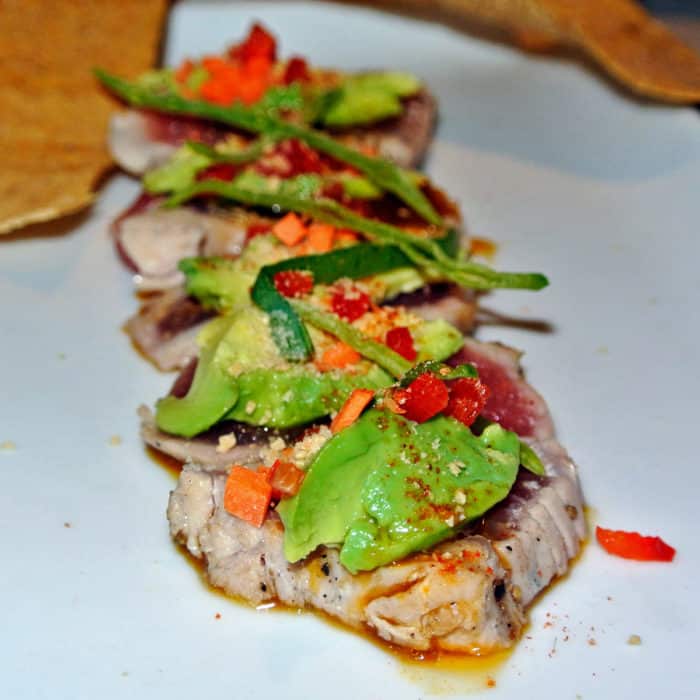 For Amy’s main, she has the Crispy Striped Bass. It was expertly battered and fried and came served with a pile of marinated mushrooms. I absolutely loved these mushrooms. Lucky for me Amy doesn’t eat mushrooms so I got to keep them all for myself.

For my main, I ordered their rendition of seared scallops which came wrapped in Serrano ham. I personally love scallops and I’ve got to tell you, this might be the very best preparation and execution of scallops I’ve ever had. They were seared absolutely perfectly, with a very nice caramelization on the top side and a perfect level of tenderness inside. They were so perfectly done and the flavor of the Serrano ham and spicy mango chutney paired very well.

Last, but certainly not least was dessert. At this point in the meal, we were both very full and were not actually planning on ordering dessert, but when our waiter described the dish known as Aji Amarillo-Ginger Mango Cobbler, we just couldn’t resist. This dish had so many things going on at once, but somehow they all worked in unison creating something so much better than the sum of their parts. The cobbler base was a crispy bread pudding with hunks of sweet mango that contrasted really well with the generous drizzle of spicy Aji Amarillo-Ginger sauce. They’ve certainly created something really special here at NAO with this dish! 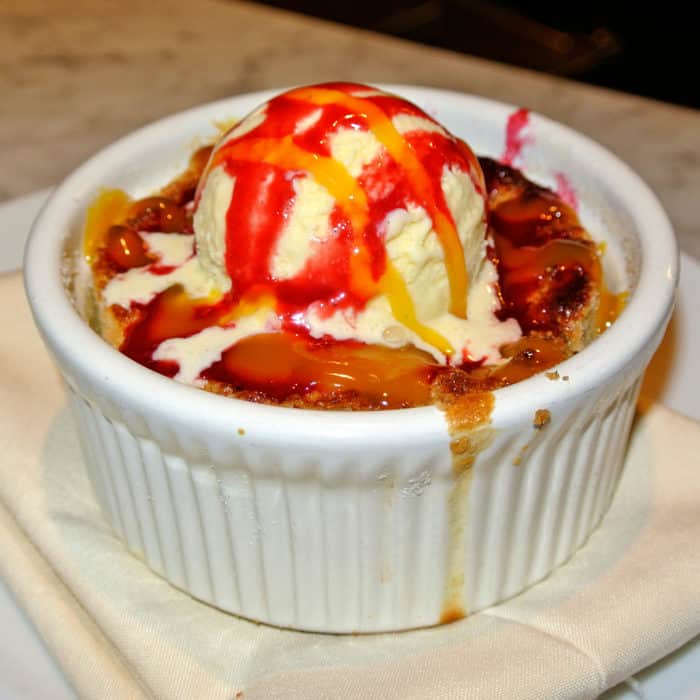 After asking for our check we noticed that we are the only guests remaining in the restaurant. I think our reservation was at 8 PM which apparently in San Antonio is a very late dining time. I guess I’m used to New York where it wouldn’t surprise anyone to begin a meal at 10:30 or 11:00. Anyway, we ask the front desk call us a cab and head back to Hotel Havana, but not before one last stop.

Inside Hotel Havana, there are a number of bars, but we headed to the one in the deep, dark, secluded basement bar known as Ocho for one last round before bed. This bar was seriously dark, like pitch black with a subtle red glow that your eyes eventually became accustomed to, but not much else. It was a very cool, mellow place with a serious whiskey list and a number of well made cocktail options. This place made for an excellent spot to quietly wind down if you ask me. 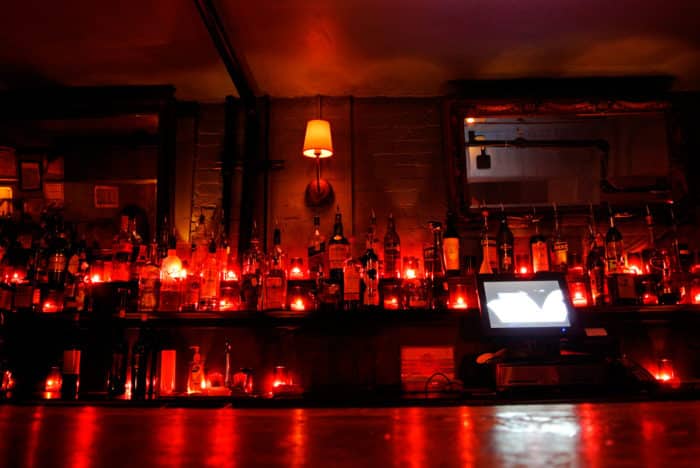 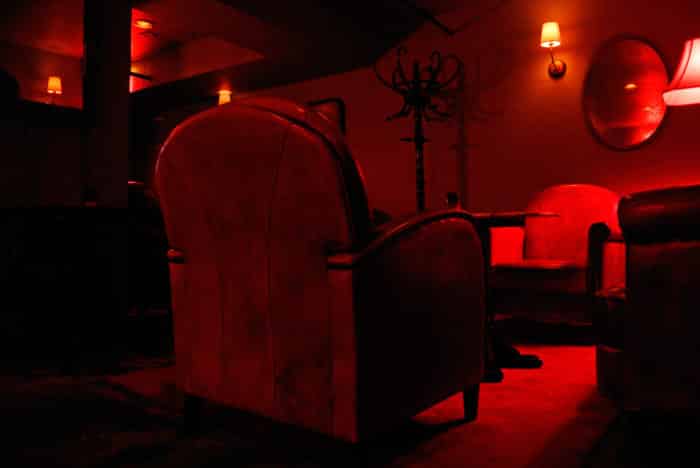 And with that, we closed out our night in San Antonio. We headed to bed to prepare for the drive back to Austin for our flight in the morning. If you’re in San Antonio, be sure to check out NAO Restaurant. They are cooking some seriously interesting dishes and have a menu that constantly changing to challenge their student chefs. Come back soon to hear about the final stop we made before concluding our giant road trip across Texas and back.