From the moment I first heard the term “hot guts” I knew I had to have it. There’s a small barbecue town called Elgin (pronounced with a hard-G like “guy”) located only 45 minutes outside of Austin, Texas and not far from my beloved brisket mecca Lockhart. We were already in town for Austin City Limits, so it seemed like a completely necessary quick day-trip. Elgin is world famous for their hot guts. What are hot guts you ask? Sausage! Ahh, that makes sense now, doesn’t it?

In Elgin, there are two big names when it comes to barbecue and more specifically, sausage. We stopped by both Southside Market and Meyer’s on this visit for a good ole fashioned head-to-head sausage face off. I, of course, ate additional barbecue items while testing the hot guts, but you knew that already, didn’t you? 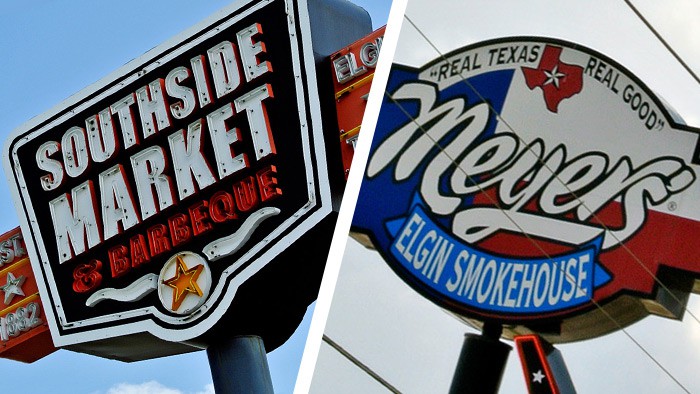 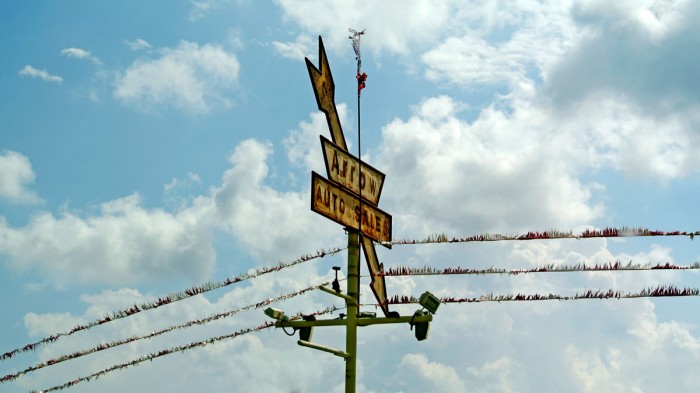 First, we hit up Southside Market which was quite a visually impressive complex from the exterior. The building was massive and was made out of rippled metal sheeting. It had that raw, authentic feel that was a comforting sight while hunting for excellent barbecue. 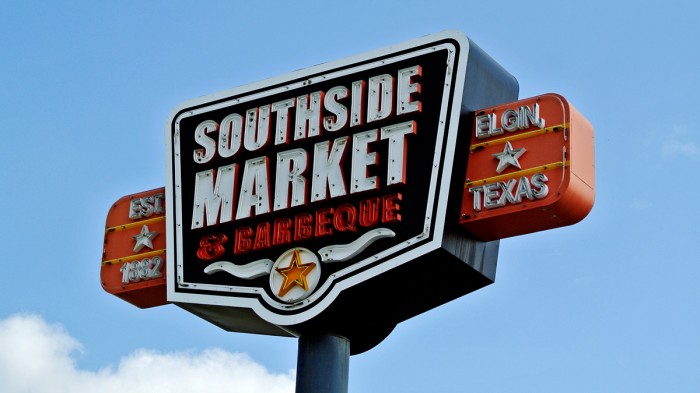 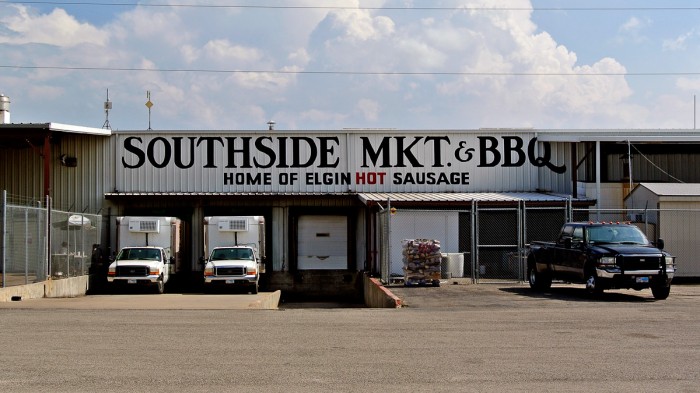 Inside was just as authentic feeling, but in a completely different way. There was lots of wood and stone covering the walls with large communal tables to plop down at after you’ve received your platter of barbecue. There was also lots of old-timey, black and white photographs of the original barbecue pit-workers smoking meats and enough taxidermy on the walls to make you feel right at home. 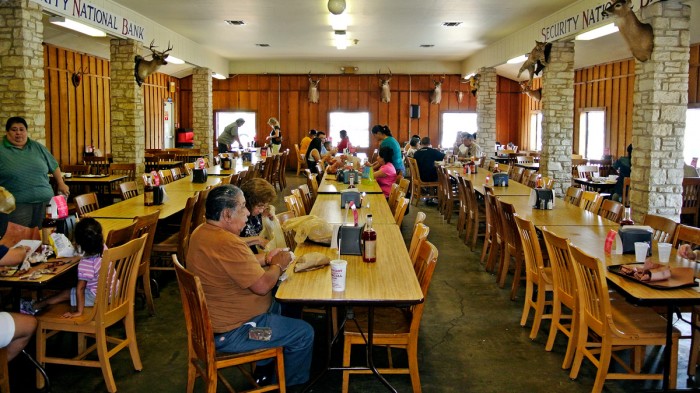 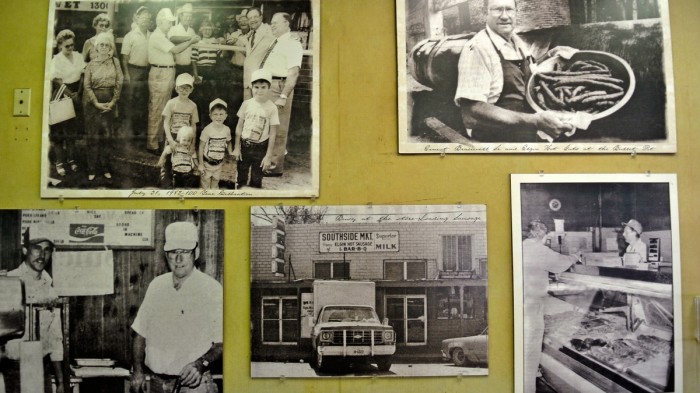 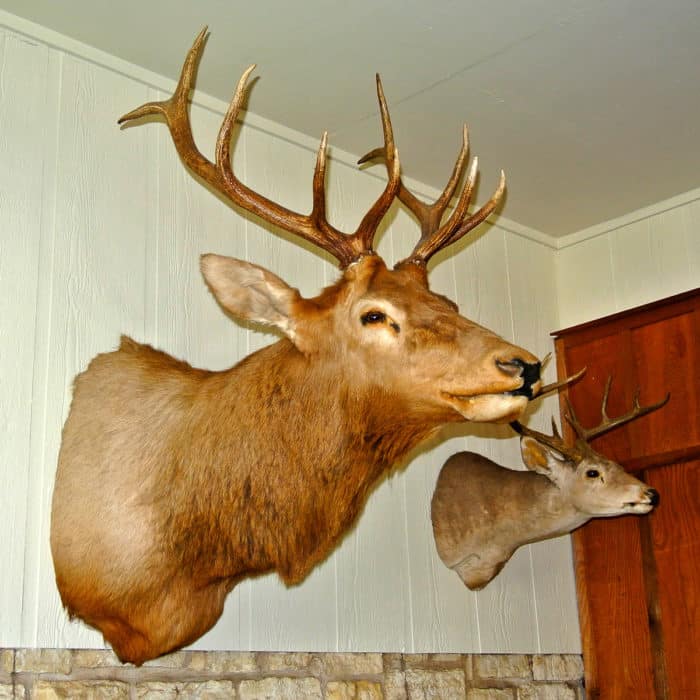 We quickly approached the ordering line and checked out the menu. I knew that the sausage was a must in Elgin, so we ordered some of their famous Original Sausage, Jalapeño Cheddar Sausage, and some Brisket for good measure. Just looking at the rock bottom prices for this incredibly carefully made meat made me weep thinking about what it cost back up north in NYC. 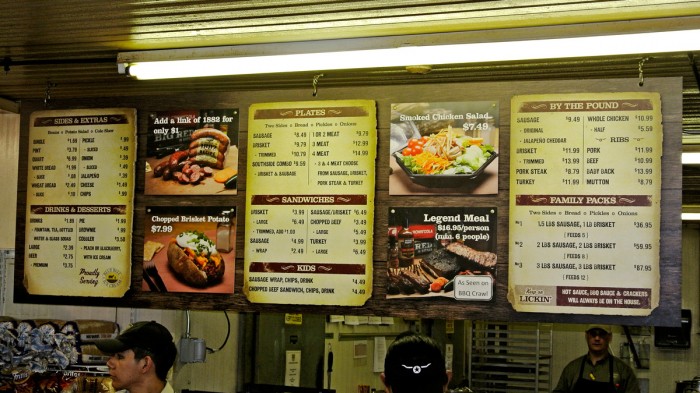 After placing our order and continuing towards the register I noticed a few things that caught my eyes. First off, I might be showing my age here, but I was amazed that businesses ever accepted personal checks as payment. I thought it was pretty funny that they actually needed a sign telling people that they no longer accept them. Also, I thought that the slogan on their soda cup was amazing, because yes, I often do feel that “Hungry is Always a Special Occasion” and being at a place as awesome as this especially felt like a special occasion.

Now onto why you’re really here, the meat. Let’s start with those famous Hot Guts. The classic. The original. This had to be some of the juiciest, loosest-packed, most tender, most flavorful, snappiest sausage I’ve ever tasted. It was pretty unbelievable. I’ve never had anything remotely like it. The original needed no sauce at all. It was really just bursting with meaty, porky, smokey flavor and had such a unique texture inside. It was hands-down incredible. 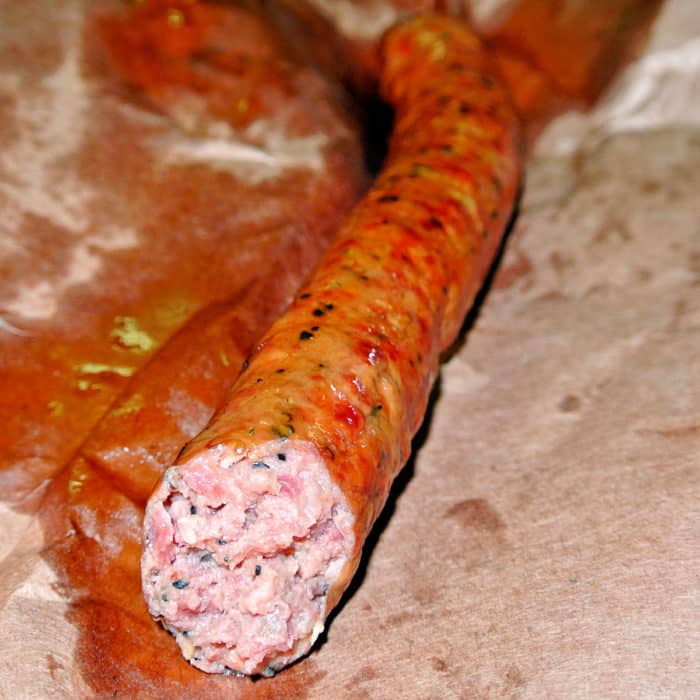 Tell me that doesn’t make your heart race

Up next was their Jalapeño Cheddar Sausage. The texture of this sausage was much closer to what I’m accustomed to. The inside was solid and meaty, with bits of jalapeño and pockets of oozy, melty, cheddar cheese. The casing was quite snappy and made a very satisfying sound when I broke through it with a knife and fork. This sausage would normally be quite good, but when directly compared to the original hot guts, the jalapeño sausage was left in the dust.

Finally, at Southside Market we had a bit of Brisket. I’ve found that brisket is usually the signature dish at most Texan barbecue joints, but in Elgin it’s really all about the sausage. I did not specify a moist or lean cut, so what I received ended up falling somewhere in the middle.

It had very flavorful, moist, fatty edges but some of the meat in the center was on the dry side. Not to worry, Southside had two different barbecue sauces, an original and a bold that I was happy to douse the drier parts with. The original was a bit sweet for me, but the bold was complex and spicy and really helped make up for the lack up moisture. If I was really looking for brisket, I’d head to Black’s in Lockhart instead. 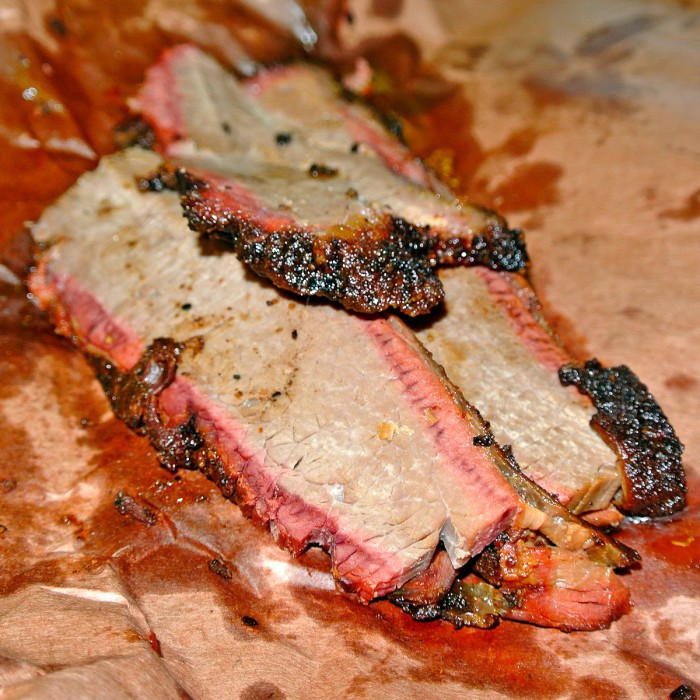 So that was Southside Market. We gathered ourselves up and drove five minutes down the road to our next stop, Meyer’s Elgin Smokehouse. I think that of the two, Southside is probably more famous, but that’s no reason not to stop in and check out the competition. The building and signage was in my opinion, less interesting and felt a bit more like a chain restaurant. It’s not a chain though, don’t worry. There were great things to come. 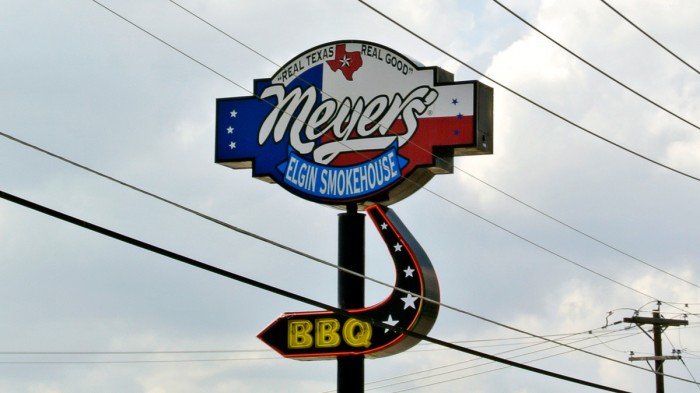 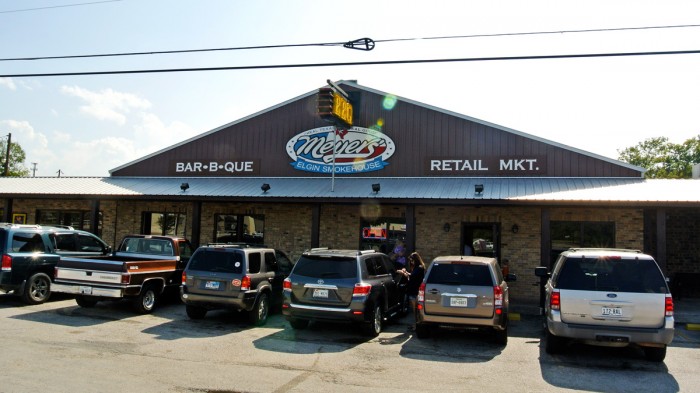 I liked the feel of the dining room at Meyer’s much better than the exterior of the building. The room was very similar to the one at Southside as well as many of the other barbecue destinations around Texas with its wood-lined, taxidermy-covered walls along with vintage barbecue photos and other strange things including odd portraits of dogs. 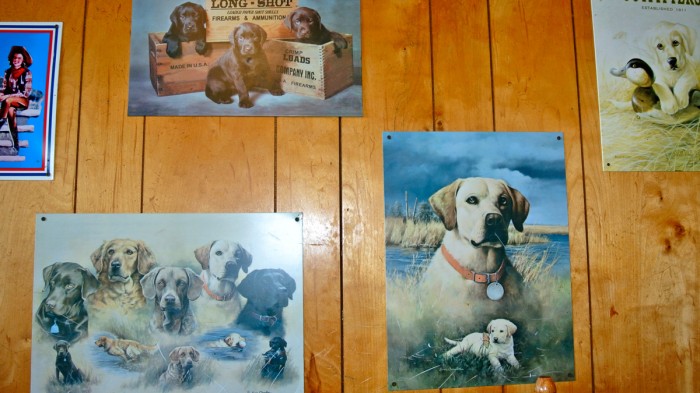 Once again, the menu! Look at the prices! This is what I’m talking about. Everything was priced so reasonably, even with all the care and labor that goes into each piece of meat. Take a lesson New York! 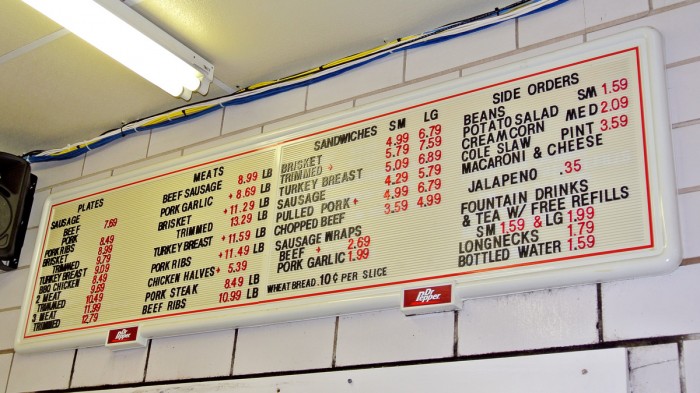 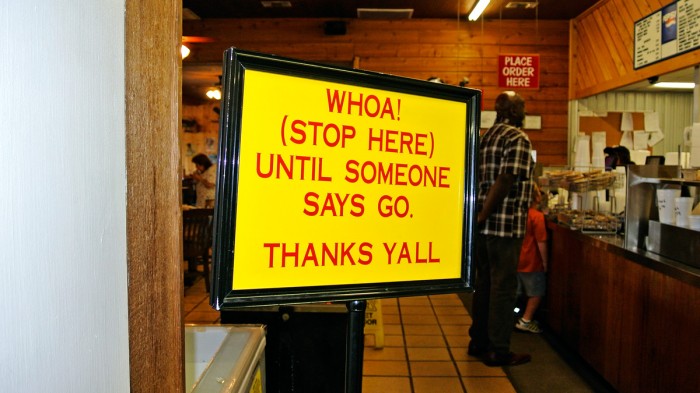 We found a table in the dinning room and checked out our haul. We started with the Beef Sausage which was quite a large, thick link with darker meat than I used to finding in sausage. This was damn good sausage with a deep, beefy, burst of bold smoky flavor. It was extremely juicy and snappy and was really excellent.

Next was the Pork Garlic Sausage, an item I’d read great things about. But, it was not as boldly flavorful as I would have liked and also not as garlicky. You know, it was very snappy and it would be excellent anywhere else, but I’d take the beef sausage over it any day. 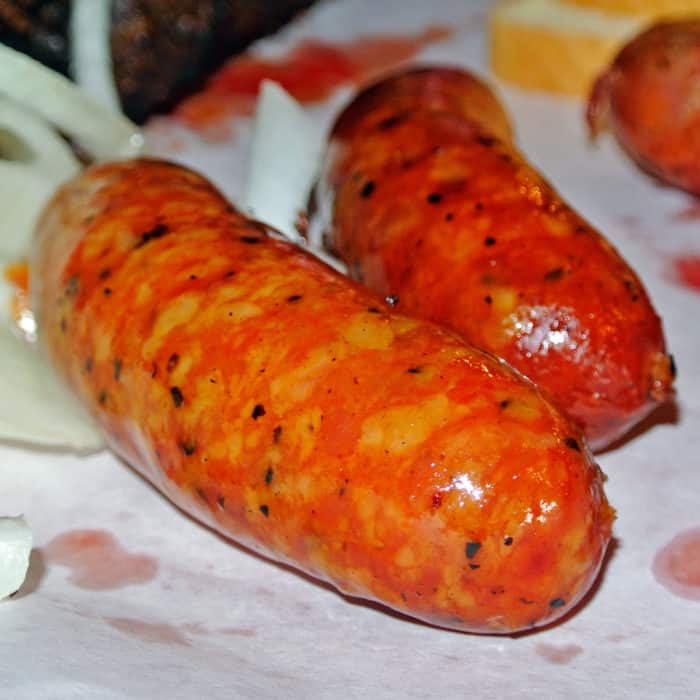 Are you ready for this? The wildcard. On a whim I decided to get a Beef Rib because I personally love them, but rarely order them in NYC. In New York, they are so incredibly expensive because they are so labor intensive and are priced by weight bone-in. Who would have thought that after heading to Elgin specifically for sausage, this dish that would end up being the very best thing at either of the two barbecue joints was be something other than sausage.

Not only that, but it might have been one of the best pieces of barbecue I’ve ever had. Better yet, it’s one of the best things I’ve ever had. The rub was so bold and crispy and once I bit in, the meat was extraordinarily tender. It was gargantuan and so soft – it easily pulled off in long, smokey, beefy strip bites. There was exactly the right level of moisture, softness, crispiness, spiciness, and fattiness in ever bite. This was absolute perfection. 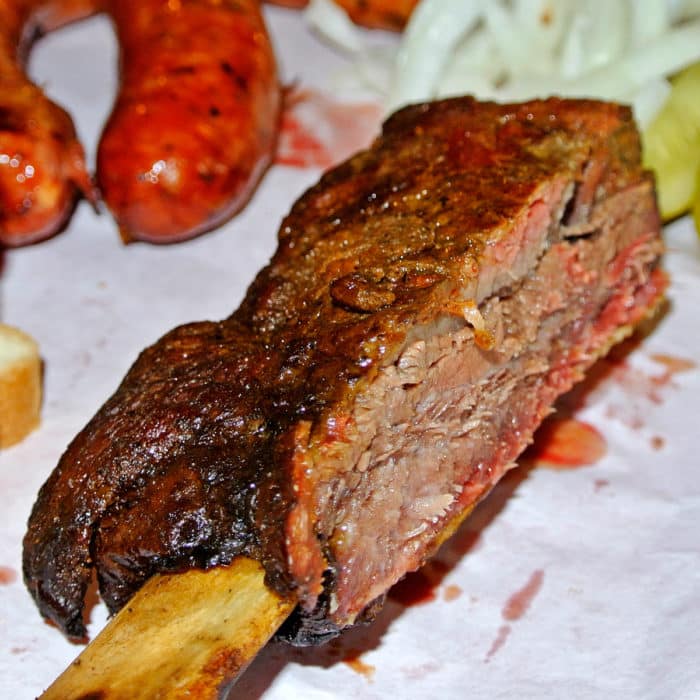 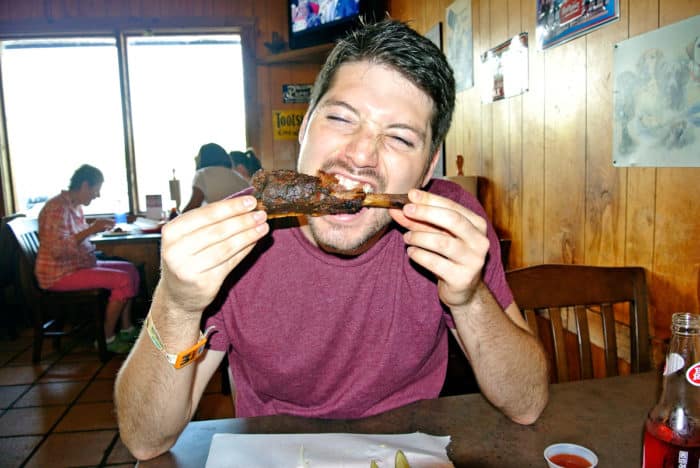 And as my girlfriend often says, what barbecue meal would be complete without some Bluebell Ice Cream? After I polished off every last bit of barbecued meat, we headed over to the ice cream case to check out the flavor options. We quickly landed on the Pecan Pralines ‘n Cream choice. For those unfamiliar with Bluebell, it’s just about the milkiest, creamiest ice cream there is. This flavor was no exception. The nutty flavor from the pecans paired really well and helped to balance the cream-heavy ice cream. 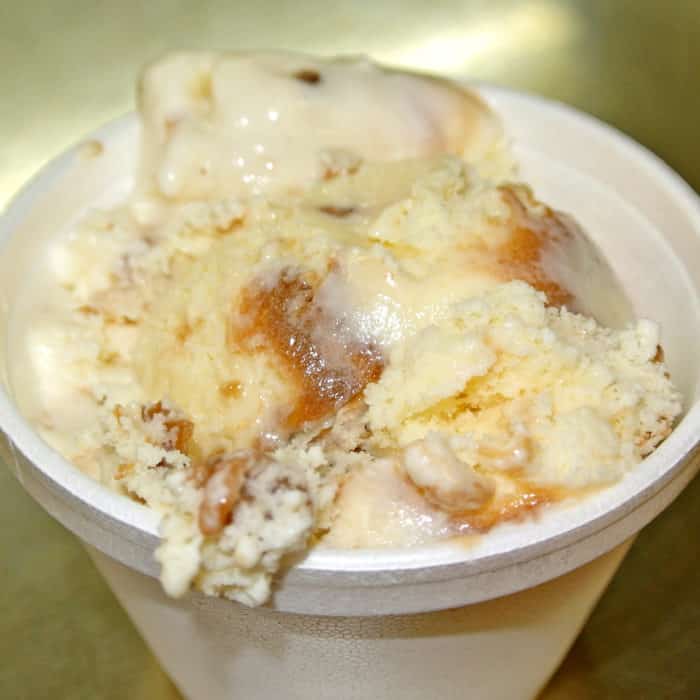 So, what’s the conclusion from this epic head-to-head? Well, when it came to sausage, though I really did love the beef sausage at Meyer’s, the original sausage at Southside really won me over. However, the gargantuan beef rib at Meyer’s was the ultimate winner of the day. Either way, you’re gonna leave happy.

Got another tiny barbecue town I need to check out? Let me know in the comments below.